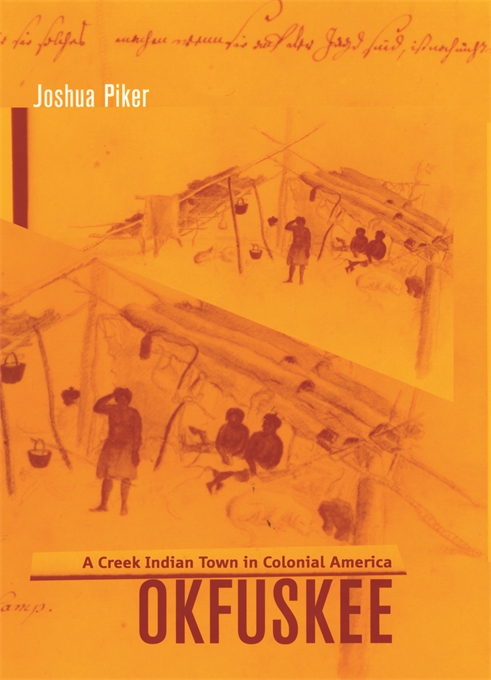 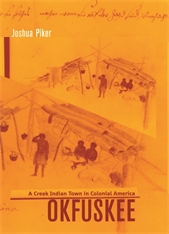 “Joshua Piker’s book adds to the current surge of interest in Creek history and contributes much, but it is his approach to the subject that makes the work unique… His skillful crafting of his findings into an excellent analysis of Okfuskee and its people shows how sophisticated the discipline of Native American history has become… Piker does an excellent job of producing a detailed history of one Native American community, and he should be commended for his innovative approach.”—Julie Anne Sweet, Alabama Review

“Joshua Piker’s book takes us inside the Creek Confederacy at the level of one of the most important political and social affiliations for an eighteenth-century Creek Indian: the township. This is its genius. Piker’s wonderful insight in doing a community study undoubtedly also made him privy to the ‘peculiar connections’ that existed between two seemingly disparate colonial towns, Okfuskee and Charleston… Piker obviously did much archival sleuthing… The result is a fine-grained history and analysis of Okfuskee international politics during the eighteenth century, replete with notable historical actors (Indian and British), historical episodes that reflect larger issues, and events particular to Okfuskee that made up the history of the town.”—Robbie Ethridge, American Historical Review

“Okfuskee [is] a penetrating and highly nuanced analysis of a single Indian town, Okfuskee. By examining Okfuskee’s internal workings and its connections to the wider colonial world, Piker has written both a community history and a trans-Atlantic story which provides the most complete understanding of how Native Americans and communities confronted ‘the problems and possibilities offered by…Euro-American neighbors’… Okfuskee effectively bridges the divide between the local and the global, interweaving an analysis of village life with discussion of structural changes that transformed the Atlantic world. The result is a monograph that will interest specialists and generalists alike. Scholars interested in Creek daily life will find many engaging morsels in Piker’s depiction of Okfuskee. Piker provides the most comprehensive look at how Creek villages worked. He effectively demonstrates the centrality of village life among the Creeks, and his discussion of local politics, family gardens, communal farming, the introduction of herding, the deerskin trade, and family life are all illuminating. At the same time, Okfuskee illuminates the complexities of colonialism in the American backcountry… Okfuskee ambitiously demonstrates how the changes within Okfuskee compared with developments elsewhere in British America. In each case, whether in discussions of gender relations, generational tensions, or power, Piker provides astonishing insight. Okfuskee deserves the attention of all Native American historians and scholars of early America in general. It provides readers a new framework for conceptualizing early American history, one that treats eighteenth-century natives as parts of the same complex narratives that we use to describe colonial society.”—Andrew K. Frank, Chronicles of Oklahoma

“Takes the novel approach of combining the tradition of community studies with ethnohistory to produce a history of a single Creek town in the eighteenth century. The first study of its kind for native communities in colonial North America, Okfuskee seeks to capture the local level of native life… Okfuskee is engagingly written and clearly argued… [T]he book should provoke serious discussion at the graduate level. In addition, the concept of approaching native history at the community level raises some intriguing possibilities for the future of Native American Studies and deserves attention from all those interested in the field.”—Michelle LeMaster, H-AmIndian

“Okfuskee is well researched, theoretically sophisticated, and often brilliantly written. By placing his vanishing point in the Creek town square, Piker demonstrates how thoroughly a simple shift in perspective can transform historical interpretations… The book’s greatness as a trailblazing study, moreover, means that subsequent works, if we are fortunate, will likely benefit from Okfuskee’s example and inevitably revisit some of its assertions from the perspectives of other town squares.”—William L. Ramsey, Journal of American History

“Okfuskee exhibits exceptional craftsmanship… The Okfuskees left few primary documents, and even their former location has disappeared under a reservoir. Piker, therefore, had to comb meticulously the existing colonial records and papers for the fragments of information that remain about this town—no easy task. Crafting those fragments into a cohesive manuscript required great skill and patience, and the result was worth the effort… It is a fine book.”—Donna L. Cox, Southern Historian

“This book is a study of Okfuskee, an important Upper Creek Indian town in 18th-century British America. Okfuskee became one of the leading Creek towns because of its size and strategic location on the west bank of the Tallapoosa River in present-day east Alabama. In colonial days, the upper trading path from the British settlements in Augusta and Charleston entered Creek country here, continuing on to the Chickasaw and Choctaw. Okfuskee’s leaders, such as Fanni Mico, Handsome Fellow, and, later, White Lieutenant, were deeply involved in Creek–British diplomatic relations throughout the colonial period. As Piker tries to untangle the day-to-day life of the Okfuskees, he provides a detailed perspective on local life in Native American society. He focuses on the Okfuskees’ actions outside the community as well as on life within Okfuskee itself.”—E.M. Thomas, Choice

“Okfuskee makes an enormous contribution to our understanding of American Indian history and Indian-European relations. The Creek Confederacy is widely assumed to have had no center but to have been a coalition of autonomous towns joined in alliance. Piker is really the first to untangle what that meant in Creeks’ day-to-day interactions with outsiders. His emphasis on a single town makes a vital contribution by breaking down the monolithic ‘Indians’ and ‘English’ paradigm that has shaped nearly all scholarship on the Indian–Anglo frontiers of colonial America. A strikingly original and important book.”—Nancy Shoemaker, University of Connecticut