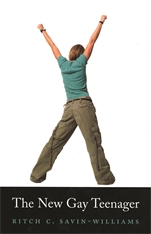 Gay, straight, bisexual: how much does sexual orientation matter to a teenager’s mental health or sense of identity? In this down-to-earth book, filled with the voices of young people speaking for themselves, Ritch Savin-Williams argues that the standard image of gay youth presented by mental health researchers—as depressed, isolated, drug-dependent, even suicidal—may have been exaggerated even twenty years ago, and is far from accurate today.

The New Gay Teenager gives us a refreshing and frequently controversial introduction to confident, competent, upbeat teenagers with same-sex desires, who worry more about the chemistry test or their curfew than they do about their sexuality. What does “gay” mean, when some adolescents who have had sexual encounters with those of their own sex don’t consider themselves gay, when some who consider themselves gay have had sex with the opposite sex, and when many have never had sex at all? What counts as “having sex,” anyway? Teenagers (unlike social science researchers) are not especially interested in neatly categorizing their sexual orientation.

In fact, Savin-Williams learns, teenagers may think a lot about sex, but they don’t think that sexuality is the most important thing about them. And adults, he advises, shouldn’t think so either.