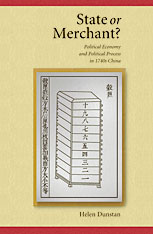 What did it mean to run a large, commercialized agrarian polity according to the best Confucian principles?

This book is intended as a contribution to both intellectual and political history. It is partly a study of how Confucian-trained officials thought about the grain trade and the state’s role in it, particularly the “ever-normal granaries,” the stockpiles of grain maintained by every county government as protection against shortages and high prices. The author investigates the scope and limits of belief in market forces among those critical of government intervention, establishing that rudimentary economic arguments for state withdrawal from the grain trade were available by 1750. She then explores challenges, from within the ruling apparatus, to the state’s claim that its own stockpiling served the public interest, as well as the factors behind decisions in the mid- and late 1740s to suspend or decrease state purchases of grain.

As a study of Confucian government in action, this book describes a mode of public policy discussion far less dominated by the Confucian scriptures than one might expect. As a contribution to intellectual history, the work offers a detailed view of members of an ostensibly Confucian government pursuing divergent agendas around the question of “state or merchant?”