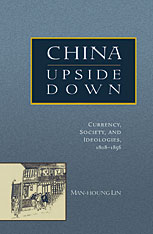 Many scholars have noted the role of China’s demand for silver in the emergence of the modern world. This book discusses the interaction of this demand and the early-nineteenth-century Latin American independence movements, changes in the world economy, the resulting disruptions in the Qing dynasty, and the transformation from the High Qing to modern China. Man-houng Lin shows how the disruption in the world’s silver supply caused by the turmoil in Latin America and subsequent changes in global markets led to the massive outflow of silver from China and the crisis of the Qing empire. During the first stage of this dynastic crisis, traditional ideas favoring plural centers of power became more popular than they ever had been. As the crisis developed, however, statist ideas came to the fore. Even though the Qing survived with the resumption of the influx of Latin American silver, its status relative to Japan in the East Asian order slipped. The statist inclination, although moderated to a degree in the modern period, is still ascendant in China today. These changes—Qing China’s near-collapse, the beginning of its eclipse by Japan in the East Asian order, and shifting notions of the proper relationship between state and market and between state and society—led to “China upside down.”