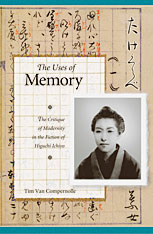 The Uses of Memory

The Critique of Modernity in the Fiction of Higuchi Ichiyō

The pioneering writer Higuchi Ichiyō (1872–1896) has been described as “the last woman of old Japan,” a consummate stylist of classical prose, whose command of the linguistic and rhetorical riches of the premodern tradition might suggest that her writings are relics of the past with no concern for the problems of modern life.

Timothy Van Compernolle investigates the social dimensions of Ichiyō’s artistic imagination and argues that she creatively reworked the Japanese literary tradition in order to understand, confront, and critique the emerging modernity of the Meiji period. For Ichiyō, the classical canon was a reservoir of tropes and paradigms that could be reshaped and renewed as a way to explore the sociopolitical transformations of the 1890s and cast light upon the human costs of modernization.

Drawing critical momentum from the dialogical theory of Mikhail Bakhtin, the author explores in five of Ichiyō’s best known stories how traditional rhetoric and literary devices are dialogically engaged with discourses associated with modernity within the pages of Ichiyō’s narratives. In its close, sensitive readings of Ichiyō’s oeuvre, The Uses of Memory not only complicates the scholarly discussion of her position in the Japanese literary canon, but also broaches larger theoretical issues.