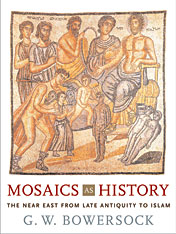 The Near East from Late Antiquity to Islam

“No one is better qualified to instill in his readers the sense of wide horizons and of unexpected continuities between cultures that are usually held to be irrevocably divided than Glen Bowersock. His recent book, Mosaics as History: The Near East from Late Antiquity to Islam, is an iridescent masterpiece. A vast weight of erudition, unflinchingly precise, is brought to bear on a few crucial (and hitherto unconsidered) problems to produce a book that has the sharpness and the shimmer of an industrial diamond. The clarity, economy, and charm of Bowersock’s writing make us forget the iron discipline on which his scrutiny of the evidence is based and the devastating effect of his conclusions on all kinds of conventional wisdom. It is the work of an urbane iconoclast… Those who wish to understand more about the deep and complex history of the Near East in all ages, our own included, would be well advised to read Bowersock’s book… Only the sharp tang of scholarship like Bowersock’s, devoted to a seemingly distant past, can clean our eyes, a little, of the itch of modern pseudohistory, of modern stereotypes, and of modern hatreds, so that we can view the present, if not with comfort, then at least with clarity.”—Peter Brown, The New York Review of Books

“This is a splendid book, well composed and closely reasoned… The author convincingly uses the mosaics and their depictions and inscriptions as an important source for understanding late antiquity in the Near East. All the way through, Bowersock emphasizes the contexts—the connection between literature and various groups of material culture—an approach that cannot be encouraged enough.”—Birte Poulsen, American Journal of Archaeology

“On the surface this may appear an esoteric and quaint study of an ancient artform, yet the author bestows it with a depth and significance that reaches right to the heart of ancient Near Eastern culture. Despite their great age, marred by neglect and sometimes deliberate vandalism, these mosaics indicate a complex fusion of cultures and religions, illustrations of literary and mythological tradition, iconography, and monuments to civic pride. Bowersock’s immense scholarship in this field, combined with a plethora of high quality, colour images, returns the reader to a time of relative peace and harmony in the Near East, when the regions we now know as Syria, Arabia, Palestine, and Jordan were united in a tradition of classicism which bound together Judaism, Islam, and Christianity in a fundamentally Semitic land.”—Antiques Magazine

“A large number of Roman-Byzantine floor mosaics have been unearthed in the Levant over the past few decades, and G. W. Bowersock’s Mosaics as History presents a refreshing synthesis of this material… [T]his is a very good book that provides a long-awaited analysis of many new and recent mosaic discoveries across the most culturally diverse regions of the Roman-Byzantine world.”—Mark Merrony, Minerva