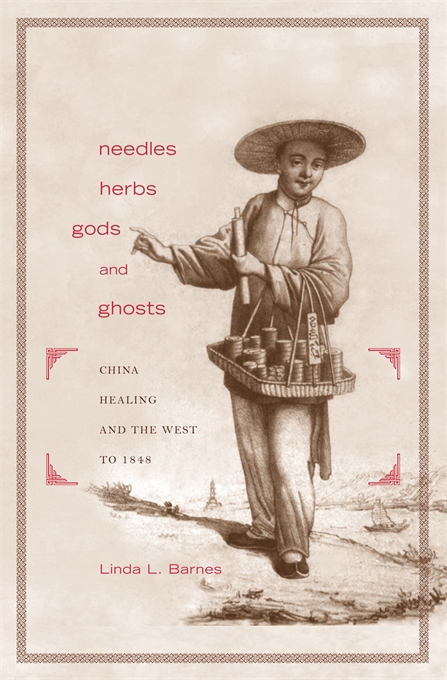 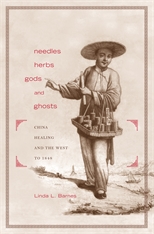 “When did the West discover Chinese healing traditions? Most people might point to the ‘rediscovery’ of Chinese acupuncture in the 1970s. But in Needles, Herbs, Gods, and Ghosts, Linda Barnes leads us back to the 13th century. There she uncovers the neglected story of the West’s earliest known encounters with Chinese religion, medicine, and healing… Needles, Herbs, Gods, and Ghosts is thoroughly academic with more than 60 pages of references; and places today’s practitioners of complementary/alternative medicine into historical context. It will certainly be of value to acupuncturists and practitioners of Chinese traditional medicine who would like to know more of the history of their healing methods… A monumental work that brings together erudite scholarship and enticing travelogue.”—Ted Kaptchuk, British Naturopathic Journal

“This insightful and richly documented study by Linda Barnes explores how Western conceptualizations of the healing traditions of China have historically reflected the broader cultural trends and assumptions that have shaped European and American attitudes towards Chinese civilization. Drawing upon an impressive array of writings and correspondence produced over the centuries by Western scholars, merchants, and missionaries, Barnes undertakes a chronological analysis of evolving perceptions of Chinese medicine and associated aspects of Chinese culture from the mid-thirteenth to the mid-nineteenth centuries… Barnes’s study of China, healing, and the West makes a significant contribution to our understanding of the complex dynamics of Sino–Western cultural relations. Her vast knowledge of the history of both Western and Chinese medicine and her comprehensive mastery of the cultural history of these contrasting civilizations provide her readers with a convincingly analyzed overview of how Westerners perceived China’s healing traditions and related cultural conceptions over a period of nearly six centuries.”—Michael C. Lazich, Church History

“Barnes has pulled together an amazing range of Western-language sources, shown in her sixty-two-page bibliography. Like the travel and exploration narratives she draws on, her account is packed with descriptions and anecdotes that flesh out the early history of European curiosity about this most remote region of the Orient… Her concern that the general reader grasp culture and context makes this book highly readable.”—Charlotte Furth, Isis

“If you have ever wondered how and when Chinese medicine made its way to the ‘West,’ this is the book for you. Linda Barnes, a medical anthropologist and comparative religionist, has assembled a massive compendium of sources from which she recreates the checkered story of European perceptions of and attitudes toward China and Chinese concepts of medicine from the early thirteenth century to 1848 A.D. Needles, Herbs, Gods, and Ghosts is a tour de force and will especially please any reader with a strong historical bent and/or a deep interest in intercultural communication, particularly as it concerns medical practice.”—Mary Ann Liebert, Journal of Alternative and Complementary Medicine

“Barnes has given us the first systematic account, encompassing a broad sweep of history, of the evolution of Western ideas about healing practices in China… The goals, organization, and scholarship in this book are both interesting and impressive… As a bibliographic tour-de-force it is a remarkable book that I welcome to my shelf.”—William C. Summers, Journal of the American Medical Association

“This fascinating book reveals how western conceptions of religion, race and medicine have distorted images of China and its healing traditions… Barnes’s approach should not only be an inspiration to all who seek to take seriously the interpretative lenses through which western culture apprehends others; but also stimulate those interested in comparative history and philosophy of medicine to appreciate the philosophical assumptions behind Chinese medicine as a distinct philosophy radically different from its western counterpart, not merely an aspect of Chinese religion, and hence to understand Chinese medicine as it was.”—Kenny Can Liao, Medical History

“[A] fascinating account of how China, the Chinese, and Chinese healing practices were imagined in the West from the late Middle Ages through to the mid-nineteenth century. [Barnes] has written a lively and compelling account that demonstrates that Chinese traditional medicine has a lengthy and important role in the development of medical discourse in the West. This work will serve as the starting point for the next generation of scholars.”—Robert John Perrins, Social History of Medicine

“This monumental work weaves together erudite scholarship and enticing travelogue. Needles, Herbs, Gods, and Ghosts uncovers an entirely neglected story of how the West encountered China’s religion, medicine, and healing practices. It challenges the reader to see how human beings encounter difference through the structure of their own thoughts and experiences. This informative, reflective, and path-breaking volume is indispensable for scholars in medicine, anthropology, history, religion, sinology, and ethnic studies. Also, because of Barnes’s clear and lively writing style, this book is an enjoyable adventure for any curious reader.”—Ted J. Kaptchuk, Harvard Medical School, author of The Web That Has No Weaver: Understanding Chinese Medicine