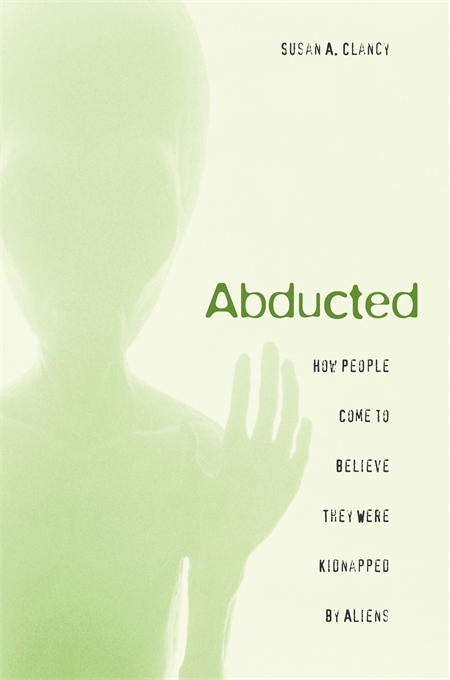 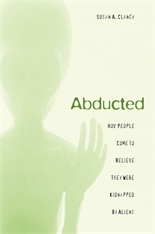 How People Come to Believe They Were Kidnapped by Aliens

“Abducted is an enormously brave, smart, original book. Susan Clancy’s innovative study of why and how people come to believe that they’ve been abducted by aliens has become a gripping read, with keen insight into the emotional and spiritual lives of the ’abductees’--and how easy it is for anyone to remember things that never happened.”—Elizabeth Loftus, past president of the American Psychological Society and author of Eyewitness Testimony

“Twenty years ago I was abducted by aliens, or so I thought at the time. Actually, I had just gone without sleep for 83 hours. Now at last Abducted--brilliant, humane, and funny--gives a scientific explanation for how the mind concocts such remarkable experiences as being probed and impregnated by aliens, visiting the mother ship, or traveling to distant planets. Writing with sympathy and understanding for the abductees, Susan Clancy delves into their stories to offer a superb contribution to our understanding of human memory, mental anomalies, and how the mind works.”—Michael Shermer, editor of Skeptic Magazine, and author of Why People Believe Weird Things

“Susan Clancy’s provocative study of the abductee population offers a thoughtful perspective on the spiritual and psychological elements of abduction stories--and is so entertaining that it reads like a novel.”—Elaine Showalter, Professor Emeritus at Princeton University and author of Hystories

“[Clancy] provide[s] a discussion of current research into memory, emotion and culture that renders abduction stories understandable, if not believable. Although it focuses on abduction memories, the book hints at a larger ambition, to explain the psychology of transformative experiences, whether supposed abductions, conversions or divine visitations.”—Benedict Carey, New York Times

“If you’re going to read just one book about alien abductions, make it this one. And if you think alien abduction stories aren’t worth considering seriously, Clancy will convince you otherwise...Clancy offers an intelligent and compassionate look at people whose ’weird’ belief usually elicits derision, and argues convincingly for the need to look deeper into its significance.”—Publishers Weekly

“Having interviewed dozens of abductees, and found them likeable and honest, Clancy writes about them with compassionate but sceptical understanding...Clancy believes her subjects only in the sense that she believes they think they are telling the truth. And she doesn’t abandon her sense of humour. She asks why mentally superior aliens haven’t anything better to do than hang around North America stealing our genes.”—Robert Fulford, National Post

“In this informal and entertaining report on her research, Clancy shows that the group of abductees she studied in 2002 were more likely to create false memories in the lab and scored high on measures of fantasy-proneness and schizotypy (personality characteristics that include perceptual aberrations and magical thinking). Despite these traits, with one or two exceptions her subjects were what society classifies as normal. She speculates that an abduction memory, though horrific, is ultimately a religious experience that incorporates contact with a higher power, a convenient narrative that provides an explanation for odd personal episodes, and a transformative event that offers a meaning for human existence.”—George Eberhart, Booklist

“[A] slim but engaging volume...Believers and sceptics alike have much to learn from this work.”—Stefan Beck, Fortean Times

“In this remarkable study of people who believe they’ve been carried off by little green men, Clancy’s subjects are memory, personality and truth as each individual experiences it. Even if the idea of alien abduction is absurd, you will find her work fascinating and revealing.”—Clare McHugh, Baltimore Sun

“The study of this belief [that one has been abducted by aliens], unshakable in most cases, leads Ms. Clancy to make some compelling observations about recovered memory, fear, science, faith, reason, the human condition and, inevitably, aliens...Alien abduction is clearly a maddening phenomenon. Nevertheless, Ms. Clancy soldiered on--for the benefit of science, the subjects and now her readers. And apart from some brisk and debatable observations about religion that pop up at the end, she has done all a service. This book is something else.”—Carol Herman, Washington Times

“Clancy is a skeptic who mounts a strong case for terrestrial rather than extraterrestrial explanations, but she does so while maintaining a steadfast compassion for her subjects. The story is told with great humor, often at the author’s expense as she finds herself in unlikely predicaments. Despite these lighter moments, Clancy never loses sight of the serious questions raised by the alien abduction phenomenon, nor does she waver in her respect for the abductees. Having concluded that these people are not dismissible as ignorant or crazy, she is left with a more unsettling truth: under the right circumstances, normal people can come to hold very bizarre beliefs...Susan Clancy’s study of alien abductees is a natural experiment that explores the outer limits of human belief and serves as a useful reminder of the importance of scientific thinking.”—Stuart Vyse, Science

“This intriguing book should appeal to the 85 percent of Americans who believe in ET, while the rest of us will find it equally fascinating that ordinary people can believe such extraordinary things.”—Ros Smith, Charleston Post and Courier

“Clancy focuses not on whether her subjects were actually abducted but on why they believe they were.”—Science News

“If one reads only one book on the subject of alien abductions and nighttime visits from extraterrestrials, it should probably be Abducted. Susan Clancy, a Harvard psychologist with the understanding ear of a bartender and the clear eye of a scientist, treats the subject frankly, fearlessly, intelligently, honestly and sometimes humorously. She avoids both the hysteria of believers out to prove that aliens visit our planet and the dismissiveness of skeptics who know they don’t.”—Alcestis Oberg, Houston Chronicle

“[An] engaging book...It provides fascinating accounts of the way abductees use evidence in their reasoning, the effects of relaxation therapy and hypnosis in creating false memories and the importance of TV shows, films and books in creating the myth of the grey alien...Clancy writes in an easy-going and engaging way, describing the processes and the ups and downs of her research as well as her findings. This is a fun, readable and informative book that helps explain how and why alien abduction has become such a powerful myth.”—Susan Blackmore, Times Higher Education Supplement

“This fascinating book takes a respectful stance with those who believe they were abducted and attempts to understand their experience through thoughtful analysis. In doing so, Clancy brings a needed scientific perspective to a subject that is usually the domain of tabloids and science fiction dramas.”—Robin A. Chapman, American Journal of Clinical Hypnosis

“In Abducted, [Clancy] describes how patients with a variety of vague and confusing symptoms, such as recurrent nightmares and sleep paralysis, found reports of alien abduction an interesting possible explanation for their troubles and were brought to believe in it through treatments that included hypnosis. Many of these patients, it turned out, were pleased by what they came to believe. Being abducted by aliens, they thought, meant that they were “chosen” or “privileged” as human representatives.”—Paul McHugh, Wall Street Journal

“Susan Clancy’s book bursts out of the chute right on page one and keeps going at full gallop until the end. It’s fabulous! Anyone who thinks that scientists are cold and uncompassionate, or that people who believe they have been abducted by aliens are plain loony, should read this book. With warmth, humor, empathy and eloquence, Clancy illuminates the soul of science--and shows why everyone resists its revelations if they challenge our deepest beliefs.”—Carol Tavris, author of The Mismeasure of Woman and Psychobabble and Biobunk: Using Psychology to Think Critically About Issues in the News