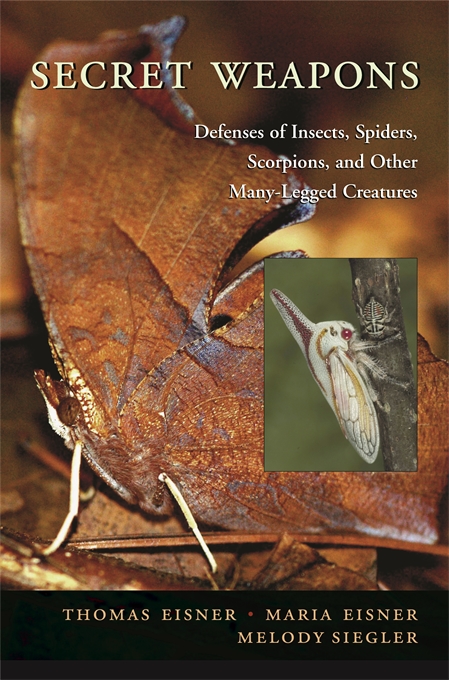 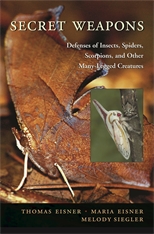 Defenses of Insects, Spiders, Scorpions, and Other Many-Legged Creatures

Mostly tiny, infinitely delicate, and short-lived, insects and their relatives—arthropods—nonetheless outnumber all their fellow creatures on earth. How lowly arthropods achieved this unlikely preeminence is a story deftly and colorfully told in this follow-up to the award-winning For Love of Insects. Part handbook, part field guide, part photo album, Secret Weapons chronicles the diverse and often astonishing defensive strategies that have allowed insects, spiders, scorpions, and other many-legged creatures not just to survive, but to thrive.

In 69 chapters, each brilliantly illustrated with photographs culled from Thomas Eisner’s legendary collection, we meet a largely North American cast of arthropods—as well as a few of their kin from Australia, Europe, and Asia—and observe at firsthand the nature and extent of the defenses that lie at the root of their evolutionary success. Here are the cockroaches and termites, the carpenter ants and honeybees, and all the miniature creatures in between, deploying their sprays and venom, froth and feces, camouflage and sticky coatings. And along with a marvelous bug’s-eye view of how these secret weapons actually work, here is a close-up look at the science behind them, from taxonomy to chemical formulas, as well as an appendix with instructions for studying chemical defenses at home.

Whether dipped into here and there or read cover-to-cover, Secret Weapons will prove invaluable to hands-on researchers and amateur naturalists alike, and will captivate any reader for whom nature is a source of wonder.