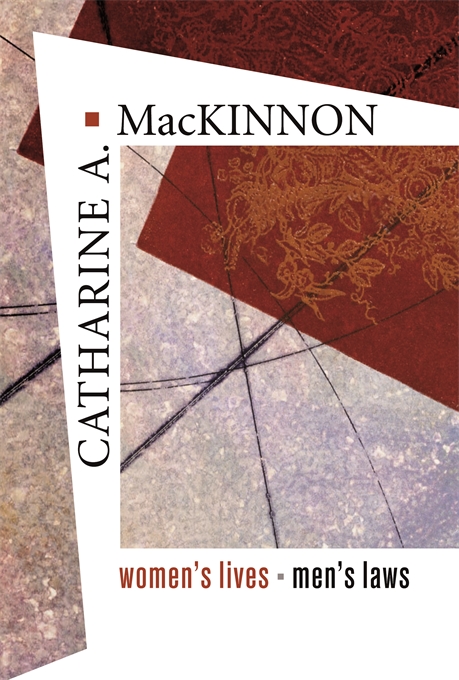 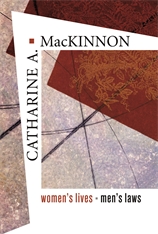 “MacKinnon’s first collection of essays since 1987 is absorbing and important… Perhaps more than anyone else, MacKinnon has changed the way we use the law in America today. The essays here on rape, abortion, prostitution and harassment law make clear how, and it’s intellectually exciting stuff… Women’s Lives, Men’s Laws is a compelling vision of how our use of law shapes inequality and how we might rethink it.”—Jennifer Michael Hecht, The New York Times Book Review

“The book contains much that is impressive, both intellectually and rhetorically, and it is instructive both about the history of MacKinnon’s battles and about the issues.”—Thomas Nagel, The Times Literary Supplement

“Histories of American law in the late twentieth century will discuss the contributions of only two or three people who made major contributions to the law as scholars, not judges. Richard Posner is one. Catharine MacKinnon is another. Women’s Lives, Men’s Laws, a collection of her essays, many published before but some in hard-to-locate journals, shows why… Historians will grapple with MacKinnon’s role in constructing contemporary law. Today’s readers will benefit enormously from grappling with her claims about what that law is and should be—even, or perhaps particularly, the claims that for the moment seem off-the-wall.”—Mark Tushnet, American Lawyer

“Catharine MacKinnon brings several decades worth of writing and speaking on the role of women in law together in this collection of essays. Women’s Lives, Men’s Laws is a fascinating look at MacKinnon’s vision of what law could be if it supported, or God forbid, promoted the rights of women in the court system. In essays on myriad topics such as the equal rights amendment (ERA), color and gender, the evolution of sexual harassment laws, Brown vs. the Board of Education, and even animal rights, MacKinnon makes the same point over and over again—that the law fails women, and change is too slow and not enough… Women’s Lives, Men’s Laws shows how the law can give women power if they know how to use it to their advantage, and encourages women to improve the law by getting their experiences included in the making and interpreting of laws.”—Wendy Anderson, Bookslut

“[Women’s Lives, Men’s Laws]’s scope makes it an absorbing overview of MacKinnon’s views on women’s inequality… Her perspective obviously recognizes and builds on the insights of the legal realism and critical legal studies schools, but MacKinnon makes the extraordinarily bold move to develop positive theory and practice of sex equality under the law. In this I think that she joins only a handful of contemporary theorists whose work goes beyond critique and offers a genuinely new way of talking and thinking about significant problems… MacKinnon is extraordinary in her willingness to tackle big, provocative questions about the nature of law, the requirements of justice, and limitations of legal discourse… It is rare for a collection of this type to offer genuinely new intellectual insights but Women’s Lives, Men’s Laws does just that. It is a significant addition to legal scholarship abut equality and an important amplification of MacKinnon’s vision for women’s rights.”—Rose Corrigan, Law and Politics Book Review

“Women’s Lives, Men’s Laws is a powerful collection of more than two decades of Catharine MacKinnon’s feminist legal scholarship. Perhaps MacKinnon’s greatest strength in this compilation—in which she discusses a range of issues, from equality theory to sexual harassment to pornography—is her methodology. She truly builds her ‘theory out of women’s practice, comprised of the diversity of all women’s experiences.’ Her steadfast connection to the women upon whom and for whose benefit her theory is based can be credited for the richness and persuasiveness of her arguments.”—Jennifer Denbow, Law, Culture and the Humanities

“One mark of [MacKinnon’s] status as someone taken very seriously in some very serious quarters is the fact that the current collection is simply that—not a book woven together from or built on older pieces, but a handy repository for some of MacKinnon’s law journal articles, anthology contributions and speeches… Women’s Lives, Men’s Laws offers reminders of what she thinks sexual equality would look like and how she thinks the law might come to share in the creation of such equality despite having spread its protective arms around sexual inequality for so very long.”—Elizabeth Spelman, London Review of Books

“As an activist and legal scholar, MacKinnon has been a prominent force in feminism since the mid-1970s, when she pioneered the legal claim for sexual harassment. Her latest volume brings together 29 essays that show how the juridical legal system empowers men at the expense of women… MacKinnon offers thought-provoking commentary on a wide range of subjects, including the ERA, abortion, Brown v. [Board of] Education, the history of sexual harassment law and the intersections of sexism with racial inequality and animal rights.”—Publishers Weekly

“Women’s Lives, Men’s Laws contains the deepest and best feminist writing around, and there is nothing like it. MacKinnon is a figure of singular importance for the history of feminist thought and for its present. Before MacKinnon, there was no legally usable concept of sexual harassment. Now in any law library there are shelves of publications developing her ideas. Before her work, sexual advances in the workplace were not typically seen to involve an asymmetry of power (although they always did involve this, and women knew it). Now even the most conservative judge will use MacKinnon’s framework of analysis in adjudicating cases. Before MacKinnon, again, issues of sexual equality were commonly dealt with by saying ‘equals to equals, unequals to unequals’—so if a difference could be shown between women and men, for example that only women get pregnant, not providing employees with pregnancy insurance did not constitute sex discrimination. After MacKinnon the concept of equality was understood in terms of a different antonym—subordination, second-class citizenship. Before MacKinnon, the law of obscenity focused on the alleged offensiveness of the sexy. Now even those who do not agree with her practical proposals agree that issues of violence, subordination, and abuse must be central in coming to grips with the problem of pornography. Finally, it is to a considerable extent due to MacKinnon’s influence that sexual abuse of women is now regarded as a major human rights violation internationally. In short, as even critics of her views will readily agree, there is no single person who has done more to change the course of American law. She is among the century’s most important thinkers, and I can think of none whose theoretical work has done more to improve human well being.”—Martha Nussbaum, author of Cultivating Humanity

“The writings in MacKinnon’s Women’s Lives, Men’s Laws continue to be excellent—fresh, concise and incisive. She has new things to say that will continue to enrapture and enlighten a large readership (and perhaps enrage others, many of whom perhaps never actually read her work).”—Frances Elisabeth Olsen, author of Feminist Legal Theory