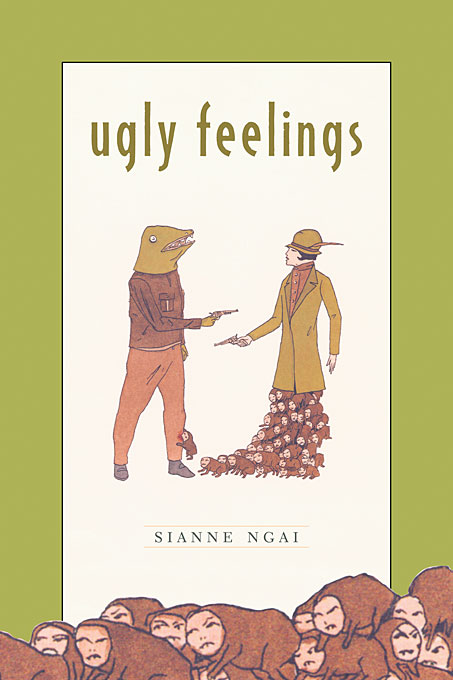 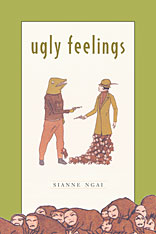 “Strikingly original… A sweeping yet fine-grained analysis of the aesthetics of negative emotions such as envy, anxiety, irritation and paranoia.”—David Trotter, London Review of Books

“The book’s worth lies in its ambition, even its overreach. This is no cultural-studies grab-bag: Ms. Ngai really is breaking new ground.”—Benjamin Lytal, New York Sun

“Wow! That is almost all that I have to say about Sianne Ngai’s Ugly Feelings. This is an amazing book, stunning in its depth and range, exemplary in its learning, and almost continually surprising in its inventiveness. Ngai seems to have read and seen almost every text and movie, and not just read and seen but imagined or reimagined them with dazzling intensity. And she writes a clear, precise prose replete with striking antitheses and inventive analogies. Most important for me, Ngai is the best-read theorist I have ever encountered—for her scope and even more for her ability to find the perfectly opposite argument to engage or to extend as she develops her own case.”—Charles Altieri, Contemporary Literature

“Ugly Feelings is a thought provoking book in the aesthetics of negative feelings with insightful reflections upon the social and experiential impact of artistic creations.”—Dina Mendonça, Metapsychology

“Ugly Feelings [is] one of the most intellectually dazzling and wide-ranging critical studies to appear in years. This is, in fact, far more than a book about emotions… Taken as a whole, it is no less than: a broad new interpretation of cultural modernity/postmodernity; a concerted attempt to reinvigorate race/gender analysis by pushing beyond some of its most familiar impasses; and, most impressively—at a moment when the ‘return to aesthetics’ has become a vague rallying cry in much contemporary criticism—a rigorous argument for, and consistent demonstration of, a distinct mode of reading that gives equal weight to formal and cultural/political concerns. What may be most remarkable, however, is the way these features come together, such that each close reading is presented inseparably from a sustained theoretical argument that both stands strongly alone and contributes to the larger project of the book.”—Jennifer L. Fleissner, Modernism/modernity

“The book is rewarding for the originality of its perspective.”—G. D. MacDonald, Choice

“Ugly Feelings tries to be many things in every chapter: a rhetorical reading of a set of ‘marginal’ avant-garde or popular texts, a deconstructive critique of ‘blind spots and antimonies’ in the way contemporary theory has approached a given problematic, and an articulation of a ‘cultural predicament,’ all through an exemplification of an affective quality that most commentators usually shy away from because of its ‘minor’ tone and ‘negative’ force. This is a most ambitious agenda—and one that Ngai succeeds admirably in carrying out. The analyses are beautifully crafted, complex without being convoluted, each judiciously drawing upon an appropriate subset of an impressive range of theoretical resources and cultural references. Although the book presents itself primarily as a contribution to literary and media studies, its impact will extend much further. In addition to developing highly original readings of its chosen texts, it reexamines pivotal political–cultural issues, concerned in particular with representations of gender and race, through a new revitalizing affective lens. In the uniqueness of the approach, familiar debates take on new life. The sustained engagement with affect and emotion, coupled with deconstructive technique, gives the book a certain unity across the differences in subject matter and the cultural–theoretical issues tackled by each chapter.”—Brian Massumi, author of Parables for the Virtual