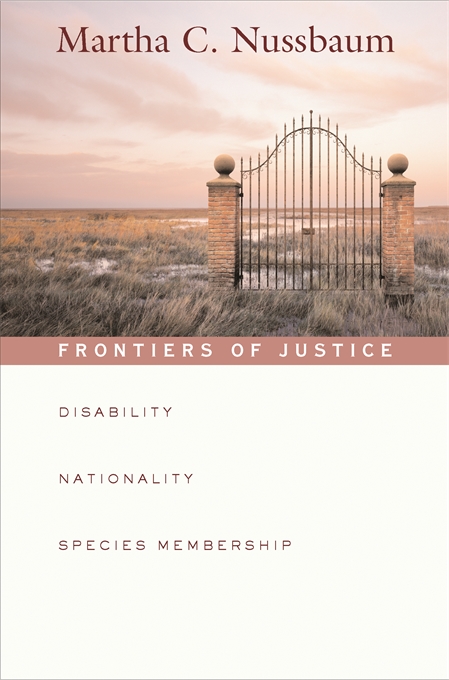 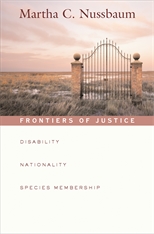 “Martha C. Nussbaum’s impressive new book Frontiers of Justice can be easily summarized as Rawls meets Aristotle… Well-argued and beautifully written, Frontiers of Justice is an important, provocative and thoroughly admirable book, and will be essential reading for anyone interested in the concepts of justice and moral entitlement.”—Mark Rowlands, The Times Literary Supplement

“Martha Nussbaum has written a substantial philosophical treatise on the difficulties that recent fashions in political theory have put in the way of understanding the nature of justice for the mentally and physically disabled, foreigners, and animals… She is philosophically deft… One real achievement of Frontiers of Justice is to stir up the reader’s imagination. Some books beat the reader into submission; Martha Nussbaum has never done that, and here she invites the reader into an open-ended discussion in just the way one wishes that all other philosophers did.”—Alan Ryan, The New York Review of Books

“[Nussbaum] aims to widen the reach of Rawlsian theory by addressing questions it has thus far largely neglected, such as the role of distributive justice in international relations, the claims of disabled people and the moral status of nonhuman animals. Nussbaum’s resourceful and imaginative exploration of Rawls’s work displays a command of the longer tradition of political philosophy that matches and even surpasses that of Rawls, along with a notably richer sensitivity to the history and variety of constitutional arrangements. The result is a notable contribution to philosophical inquiry that merits the most careful study by all who try to think seriously about public policy.”—John Gray, The Nation

“The task of the public intellectual is to ensure that important areas of common life (public policy, cultural activities, moral understandings, and so on) live up to the standards thoughtful reflection reveals. The United States has not proved the most fertile ground for this sort of person, but now and then contenders arise, and Martha Nussbaum is surely one of the more formidable candidates of our time, discharging the responsibilities of that role with a dizzying industriousness… In Frontiers of Justice she brings her considerable talents and energy to a set of questions which, she persuasively argues, public discourse and philosophical reflection have too long ignored: namely, what are our obligations to the disabled in our midst, the poor around the globe, and nonhuman animals everywhere?”—David McCabe, Commonweal

“Professor Nussbaum calls her work a ‘picture of who we are’ in a world ‘more complicated, and interdependent, than philosophical theory has often acknowledged.’ But it may also be a map for navigating that complicated world in the pursuit of justice.”—Harvard Law Review

“In this groundbreaking work, Nussbaum develops her capabilities approach—enlarging our conceptions of reciprocity, dignity, and flourishing—in an effort to make it adequate to the three problem areas. The results of this original, erudite investigation include major contributions to moral and political theory, disability studies, the international relations literature, and animal ethics.”—David DeGrazia, George Washington University

“For over thirty years, thanks to John Rawls’s great work, the idea of a social contract has provided the dominant framework for liberal theories of justice. Frontiers of Justice is the most important challenge to this framework from within liberalism since the ascendancy of Rawls’s theory. Eschewing utilitarianism, Nussbaum draws on the capabilities approach she developed elsewhere to show deep problems with using the social contract idea for modeling the liberal ideals of inclusiveness and equal respect for human dignity. The book’s impact on liberal political thought will be resounding. Its arguments and program are bound to be discussed for a long time.”—John Deigh, The University of Texas at Austin

“In her new and pathbreaking book, Martha Nussbaum shows that the social contract tradition, despite its great insights, cannot handle some of the most important political problems of our day, and she points the way to a conception of justice more attuned to our human frailty, our global society, and our place in the natural world. This work will change how we think about the nature of social justice.”—Charles Larmore, University of Chicago

“Prevailing ethical theories neglect three important subjects: the treatment of persons with disabilities, the scope of justice beyond the nation-state, and duties owed to non-human animals. Martha Nussbaum’s landmark book offers a courageous and bold approach to these issues based on fellowship and respect. Honest about where it builds on past theories and where it departs from them, Frontiers of Justice boldly and elegantly charts the territory for much needed theoretical and policy debates.”—Martha Minow, Harvard Law School