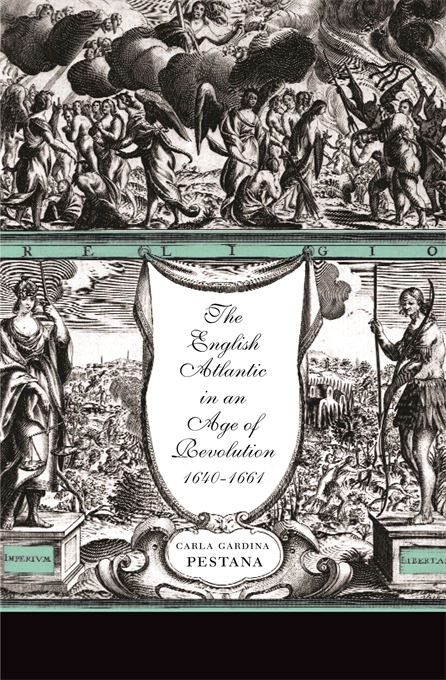 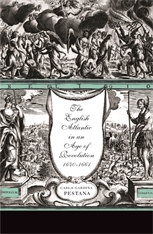 “[A] meticulous and highly detailed book… Novel and clarifying.”—Linda Colley, The New York Review of Books

“Carla Gardina Pestana is the first scholar to attempt to integrate the story of the entire English Atlantic with that of the three kingdoms of the British Isles. To achieve this goal she has mastered an impressive amount of secondary literature, printed documents, and manuscript materials… This is a book that demands the attention of anyone who is interested in the history of seventeenth-century England or the colonies that made up the first British empire. It should provoke new interest in the stories of hitherto neglected colonies and suggest new ways of understanding the relationships among the colonies themselves and the between colonies and the mother country.”—Francis J. Bremer, Journal of American History

“Carla Gardina Pestana’s book is an exemplary study in Atlantic history… Pestana provides an innovative recasting of English colonial history, framing new questions for subsequent study and reshaping our understanding of the English Atlantic in its earliest and formative decades. [She] argues that the English colonies were transformed between 1640 and 1660 and that the transformations can be explained by the events of the civil war and revolution… It is impossible to overstate Pestana’s accomplishment.”—Alison Games, Journal of British Studies

“Carla Pestana’s new book marks a significant step in the re-imagining of colonial America. Instead of focusing on a particular colony, her work spans the English Atlantic—the series of colonies, some rather small and soon forgotten, that ranged from Newfoundland to the Caribbean. Her theme is an important one that has lain dormant for too long: the transformation of England’s Atlantic colonies by the revolutionary events of the 1640s and 1650s. The result is a powerful account of how an event generally overlooked in American histories played a crucial role in the development of colonial American society.”—Evan Haefeli, Business History Review

“Carla Gardina Pestana’s The English Atlantic in an Age of Revolution, 1640–1661 fills a surprising gap in the scholarly literature… For its scope and complexity, Pestana’s argument is brief, lucid, and persuasive… This nuanced vision of Atlantic history places imperial and metropolitan actors at the center of the narrative (and rightly so) while stressing the diversity of the English Atlantic and the importance of local circumstances to the history of empire.”—Michael LaCombe, Common-Place

“This book will remain for a long time on the historian’s shelf by virtue of its own strength.”—Luca Codignola, International History Review

“This book will be welcomed by research specialists and students alike. It contains an appendix discussing population estimates for colonies in 1640 and another listing pamphlets about New England published in England during the 1640s. The endnotes fill eighty-nine pages of close type… There is a detailed map of the English Atlantic World at the outset, and throughout the book Pestana does not assume that her reader has a command of the narrative details of either the English Revolution or the early phases of English colonialism. The book would therefore lend itself to courses dealing with early modern England, colonial America, or the Atlantic world… Pestana’s book is therefore a most welcome addition to the field.”—Joseph P. Ward, Seventeenth-Century News

“[An] ambitious analysis of transatlantic politics… The provocative analysis in The English Atlantic in an Age of Revolution challenges scholars to develop a more expansive and inclusive view of the colonial Atlantic world: a view that accounts for the international and global trends that influenced Anglo–American relations and a view open to the possibility that poor, unfree, or female colonists may not have been limited to the outlooks, experiences, or ideas articulated by politically active men.”—John Wood Sweet, William & Mary Quarterly

“Throughout this original contribution, Pestana demonstrates both the vitality and the potential of Atlantic World scholarship for better understanding the total history of England’s colonial empire.”—J. Mercantini, Choice

“In this ambitious study of a neglected subject, Carla Gardina Pestana interrogates how changes in social, religious, and political matters in England’s overseas colonies were influenced by the course of revolution in England, Scotland, and Ireland. She particularly demonstrates the enduring impact of the Cromwellian regime upon the English presence in the Atlantic. Drawing on a wealth of sources, she poses intelligent questions that elicit frequently surprising answers. This is a compelling contribution to Atlantic history.”—Nicholas Canny, National University of Ireland, Galway

“Carla Pestana shows that England’s Puritan Revolution was, among other things, an American revolution of the first importance. In this deftly written, meticulously researched book, the Civil War and interregnum regain their rightful place as central agents of the social, economic, religious, and political changes that swept England’s Atlantic empire during the middle decades of the seventeenth century. Pestana is to be congratulated for revising decades of scholarly neglect and making an important contribution to scholarship on both sides of the Atlantic.”—Eliga H. Gould, University of New Hampshire

“This is a model example of Atlantic history, responding to new work in both American and English history. Carla Pestana’s argument that the experience of the colonies, including those in the West Indies, replicated in many ways the experience of England’s counties during the upheaval of the English Civil War is intriguing. Even more provocative is her insight that being forced to make uncomfortable choices between competing claims of English regimes led to the colonists’ forging a new category of loyalty to England rather than to English government. Her book will be essential reading on the seventeenth century.”—Karen Ordahl Kupperman, New York University

“Applying keen insight to thorough research, Carla Pestana recovers the power of the English Civil War in reshaping a trans-Atlantic empire. Ranging from England to the West Indies and from the Chesapeake to New England, she captures the emerging unity of the colonial empire, increasingly responsive to an ambitious Parliament. Deftly argued and clearly written, Pestana’s book warrants the attention of anyone interested in our colonial origins.”—Alan Taylor, University of California, Davis