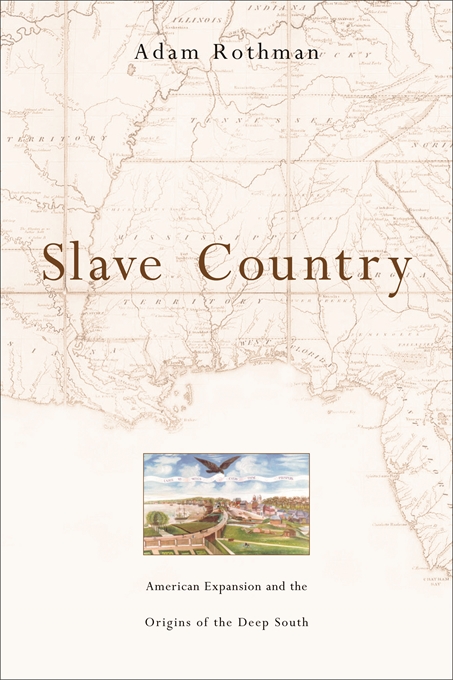 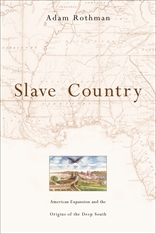 American Expansion and the Origins of the Deep South

“Adam Rothman’s Slave Country: American Expansion and the Origins of the Deep South is the fullest account we have of how slaveholding in the southern states became not only acceptable but also a source of pride and celebration.”—George M. Fredrickson, The New York Review of Books

“Adam Rothman explains persuasively and succinctly how slavery expanded into Louisiana, Mississippi, and Alabama from the 1780s to the 1820s—how a slave country, the United States, nurtured a slave country, the territory of the Deep South. The dual meaning in the title evidences Rothman’s breadth of vision; his compelling narrative interweaves great causes and small stories… His interpretative structure sets a new standard of elegance and sophistication. It is difficult to do justice to the nuances and pleasures of Slave Country in a short review. You need to read it for yourself, and buy copies for friends.”—Anthony Gene Carey, Alabama Review

“The story that moves and grows through [Rothman’s] text is one vitally important to any understanding of the nineteenth century, but one that historians are all too eager to move past in their effort to get to the ‘real’ ‘Old’ South. Rothman’s subject is the expansion of both American national power and the enslavement of Africans in Alabama, Mississippi, and Louisiana from 1790 to 1820… Rothman’s impressively detailed and documented account shows that federal surveying and land selling, as well as other forms of executive and legislative policy making, ensured that slavery and the domestic slave trade would sustain cotton and sugar dreams in the lower Mississippi Valley… An important book that sets a new agenda for studying the histories of the early U.S. republic, of the South, and of enslavement in nineteenth-century North America.”—Edward E. Baptist, American Historical Review

“Adam Rothman’s ambitious first book, Slave Country, provides an analytical narrative of how the three states associated with the Deep South—Alabama, Louisiana, and Mississippi—developed into plantation societies. Rothman weaves together political, economic, social, and military history to construct a much-needed study of this often-overooked region’s beginnings… Rothman has a first-rate writing style, a sure command of the sources, especially primary source materials, and this book fills a real need in the historical literature for a modern analysis of the growth of slavery in the Deep South.”—James C. Foley, H-Net Reviews

“Adam Rothman’s Slave Country is destined to be included on the must-read list of any serious student of antebellum slavery in the United States. The work is both significant and formative in that it recognizes the establishment of the new states of Louisiana (1812), Mississippi (1817), and Alabama (1819) as portending the formation of a Deep South ethos that defended slavery at all costs… In a sweeping narrative that finds prescient links between territorial expansion, war, free-market capitalism, and Indian removal, the work traces how the special needs of the Deep South brought about an entrenchment of slavery in a nation that was morally ambivalent to the institution.”—Junius P. Rodriguez, Journal of American History

“Rarely is an author’s first book so mature in its balance and authority. Rothman sets out to explain ‘why slavery expanded’ under the leadership of members of the revolutionary generation and their successors, and why it expanded especially into the Deep South of Louisiana, Mississippi and Alabama, lands that were part of the Louisiana Purchase… The realities of slavery appear in all their vividness, as does the distinctiveness of the white cultures of the region, especially Louisiana’s. One comes away from this readable, energetic work by Rothman appreciating how much the nation’s vaunted past—its military successes, its democratic growth, its economic might—owes to the enslavement of people out of Africa.”—Publishers Weekly

“Adam Rothman’s Slave Country addresses the critical matter of how the slave plantation regime that had been created along the Atlantic seaboard in the seventeenth and eighteenth centuries was transported to the interior in the half century prior to the Civil War. Important and provocative, it will become essential to any understanding of the antebellum South.”—Ira Berlin, author of Generations of Captivity: A History of African-American Slavery

“Adam Rothman significantly revises and enhances our understanding of how the slave society of the older seaboard South spread westward to reshape what had been the territories of Alabama, Mississippi, and Louisiana, creating what we know as the Old South. The result will be essential reading for scholars of the Early National Period and southern historians.”—John B. Boles, author of The South through Time: A History of an American Region

“Adam Rothman’s Slave Country gives dramatic conceptual and narrative life to the often forgotten years of the early republic. Most important, he offers us a powerful perspective on the making of a new slave society in the nineteenth century.”—Steven Hahn, author of A Nation under Our Feet: Black Political Struggles in the Rural South from Slavery to the Great Migration

“Adam Rothman’s marvelous Slave Country breaks the mold. Rothman is able to trace connections between imperial violence, global capitalism, and the history of slavery in the United States which have escaped the attention of legions of his forebears. The future of scholarship on American slavery starts right here.”—Walter Johnson, author of Soul by Soul: Life inside the Antebellum Slave Market

“In this deeply-researched study, Adam Rothman provides a compelling narrative survey of the expansion of American power—and slavery—into Alabama, Mississippi, and Louisiana. It is an important story that will attract widespread interest.”—Peter Kolchin, author of American Slavery, 1619–1877

“For too long, scholars have taken the expansion of slavery in the Old South as a given. Adam Rothman challenges us to consider how and why slavery expanded into newly acquired territory in the Old Southwest. Thoughtful, provocative, and innovative, Slave Country illuminates the rise of the Cotton Kingdom with all its tragic consequences.”—Randy Sparks, author of The Two Princes of Calabar: An Eighteenth-Century Atlantic Odyssey