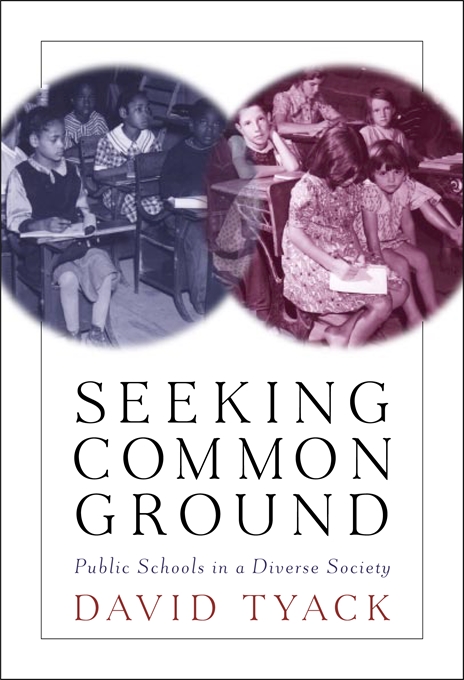 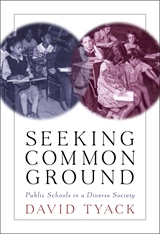 Public Schools in a Diverse Society

“This is a little book with enormous importance for policy makers, educators, parents, and anyone who is interested in American public education. Drawing on historical insight of the changes in public education, David Tyack cautions that we should balance ‘the claims of innovation and conservation’ in school reforms, for we may lose ‘what works in schools’ in the rush to make drastic changes in order to meet new demands… Tyack’s critical examination of school reforms offers timely advice for caution in reform and commends realistic policies with committed funding for education.”—Liping Bu, American Historical Review

“David Tyack makes an important argument in this book. Let’s hope that readers don’t miss it because of the ease with which it goes down. The book is a historical look at issues of unity and diversity in public education in the United States… Tyack takes us back to the origins of the public system and to the miscellany of church and pay schools that existed at the time… Seeking Common Ground is not a polemical book. Tyack identifies no bad guys, avoids hyperbole, and grounds his points in solid scholarship. One senses that the book has a strategic aim, but that aim does not weigh with a rhetorically heavy hand… Tyack has performed a great service. Those who already know Tyack’s work will find most of what he says unsurprising, but if they persist through familiar territory, a stroke of brilliance awaits. This stroke comes near the end of the book, but it gives force and reason to all that precedes it. Moreover, it is a clean move, so compelling that one wonders why one hasn’t seen it before. Educators and policy makers would do well to add it to their repertoires.”—Nancy Beadie, American Journal of Education

“Seeking Common Ground eloquently examines how leaders sought to educate citizens, deal with social diversity, and govern schools… Amid the current pleas for school reform, it is difficult to pause and reflect on the outcomes of past efforts. Tyack’s book serves as a reminder of the need to do so in hopes of avoiding history’s mistakes.”—Torria Bond, Childhood Education

“Organized around the themes of unity, diversity, and democracy, the book ranges across the landscape of educational history. Among other things, it describes the quest for a common denominator of political and moral truths that informed the creation of the common schools; discusses the various ways in which educators have dealt with questions of social and educational diversity, focusing in particular on issues of race, immigration and ethnicity, gender and academic failure; and examines questions of educational governance, including an analysis of the struggle between democratic localism and bureaucratic centralism, as well as the history of private alternatives to public education with specific reference to current debates over vouchers and school choice. [Tyack] looks at these in terms of two competing educational ideals: securing common values and respecting cultural differences, with an emphasis on how political leaders and school officials since the late eighteenth century have sought to use public education to create civic cohesion while recognizing the ethnic and religious differences of the various groups that have made up American society.”—Harvey Kantor and Robert Lowe, Educational Theory

“Seeking Common Ground is rich in historical detail, nuanced in its argument, and clearly the work of a historian who knows his craft.”—Barry M. Franklin, Journal of American History

“What most distinguishes this work is the relentless good sense and compassion with which Tyack explores the various tensions that attend upon the very project of a ‘common’ school in a society like ours. It is designed to enlighten and persuade, rather than to denigrate the other side.”—David Hollinger, University of California, Berkeley, author of Postethnic America

“With characteristic grace, David Tyack reminds us how much America’s diverse and contentious democracy has depended on education, and warns of the danger of transforming public education into a giant marketplace that ignores civic purposes. Seeking Common Ground should be read by everyone who believes that public education is, ultimately, about the making of citizens.”—Michael B. Katz, Walter H. Annenberg Professor of History, University of Pennsylvania

“In this small but in many ways, startling book, David Tyack reminds us what many of us didn’t know, or had forgotten: that today’s most pressing issues in schools have old and tenacious roots, and that Americans in the past faced many of the fears and hopes we have now. I finished the book feeling considerably more able to take on the unending struggle to create a democratic system of schooling. It’s a struggle fraught with peril, confusion, hypocrisy—and triumphs as well—and as Tyack reminds us, it always has been.”—Deborah Meier, educator and author of The Power of Their Ideas and In Schools We Trust

“A life’s work informs this little book, and the book is vintage Tyack: impeccably researched, thoughtful, gracefully written. In these times of such narrow national vision, we very much need Tyack’s long view of the conflicting but generative forces that have driven the grand and flawed American experiment in mass education.”—Mike Rose, author of Lives on the Boundary: The Struggles and Achievements of America’s Underprepared and Possible Lives

“A wise and timely book that asks Americans to ponder the meanings of unity, diversity, and democracy as these values have played out and should play out in the nation’s schools. Tyack brings badly needed perspective to the currently super-heated debates over public education.”—Theodore Sizer, co-author of The Students Are Watching: Schools and the Moral Contract