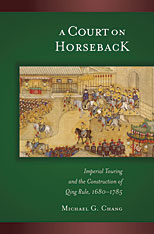 A Court on Horseback

Imperial Touring and the Construction of Qing Rule, 1680–1785

Between 1751 and 1784, the Qianlong emperor embarked upon six southern tours, traveling from Beijing to Jiangnan and back. These tours were exercises in political theater that took the Manchu emperor through one of the Qing empire’s most prosperous regions.

This study elucidates the tensions and the constant negotiations characterizing the relationship between the imperial center and Jiangnan, which straddled the two key provinces of Jiangsu and Zhejiang. Politically, economically, and culturally, Jiangnan was the undisputed center of the Han Chinese world; it also remained a bastion of Ming loyalism and anti-Manchu sentiment. How did the Qing court constitute its authority and legitimate its domination over this pivotal region? What were the precise terms and historical dynamics of Qing rule over China proper during the long eighteenth century?

In the course of addressing such questions, this study also explores the political culture within and through which High Qing rule was constituted and contested by a range of actors, all of whom operated within socially and historically structured contexts. The author argues that the southern tours occupied a central place in the historical formation of Qing rule during a period of momentous change affecting all strata of the eighteenth-century polity.