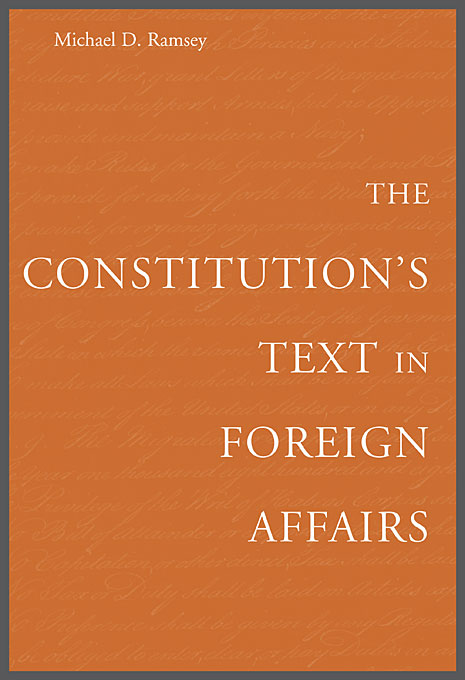 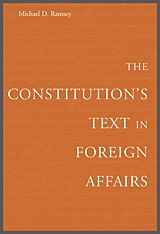 The Constitution’s Text in Foreign Affairs

“Ramsey approaches the foreign affairs text of the Constitution with high expectations. He places the words of the document front and center in his analysis, and argues that past scholars have failed to mine the text and structure of the Constitution for every insight into foreign affairs power… Writing with grace and clarity, Ramsey has produced a benchmark study that will illuminate future research but also will provide an accessible, lucid, and nicely opinionated introduction to a set of too-long-neglected constitutional issues.”—Aziz Huq, New York Law Journal

“In this valuable book, Ramsey evaluates the debate concerning presidential and congressional powers in foreign affairs. While many scholars on both sides of this debate argue that the Constitution itself is little help in defining the relationships between the legislative and executive branch in this area, Ramsey argues that the Constitution’s text is the crucial guide to explaining how the founders saw the separate and shared powers of the two branches… In a discussion with important ramifications, Ramsey also explores the meaning of the phrase ‘executive power’ in the 18th-century context. Ramsey argues that in foreign policy and in U.S. Supreme Court decisions regarding the powers of the president and Congress, the text of the Constitution, and therefore the intentions of the framers, has been misinterpreted.”—W. W. Newmann, Choice

“The Constitution’s Text in Foreign Affairs is impressive. Ramsey defies conventional wisdom that the words of the Constitution do not speak to most contemporary foreign relations law problems, showing instead how these words, as originally understood, can provide a nearly complete answer to fundamental modern questions of foreign relations law. This book is a real contribution to the field.”—Jack Goldsmith, Harvard Law School