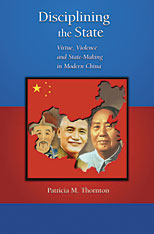 What are states, and how are they made? Scholars of European history assert that war makes states, just as states make war. This study finds that in China, the challenges of governing produced a trajectory of state-building in which the processes of moral regulation and social control were at least as central to state-making as the exercise of coercive power.

State-making is, in China as elsewhere, a profoundly normative and normalizing process. This study maps the complex processes of state-making, moral regulation, and social control during three critical reform periods: the Yongzheng reign (1723–1735), the Guomindang’s Nanjing decade (1927–1937), and the Communist Party’s Socialist Education Campaign (1962–1966). During each period, central authorities introduced—not without resistance—institutional change designed to extend the reach of central control over local political life. The successes and failures of state-building in each case rested largely upon the ability of each regime to construct itself as an autonomous moral agent both separate from and embedded in an imagined political community. Thornton offers a historical reading of the state-making process as a contest between central and local regimes of bureaucratic and discursive practice.