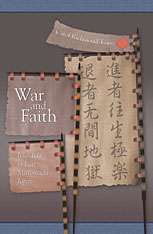 During the sengoku era—the period of “warring provinces” in fifteenth- and sixteenth-century Japan—warlords vied for supremacy and sought to expand their influence over the realm. Powerful religious institutions also asserted their military might by calling upon their adherents to do battle against forces that threatened their spiritual and secular interests.

The Honganji branch of Jodo Shinshu (True Pure Land Sect) Buddhism was one such powerhouse that exercised its military will by fanning violent uprisings of ikko ikki, loosely structured “leagues of one mind” made up of mostly commoners who banded together to fight for (or against) any number of causes—usually those advanced by the Honganji’s Patriarch.

Carol Richmond Tsang delves into the complex and often contradictory relationship between these ikko leagues and the Honganji institution. Moving beyond the simplistic characterization of ikki as peasant uprisings, the author argues cogently for a fuller picture of ikko ikki as a force in medieval Japanese history. By exploring the political motivations and machinations of the Honganji and the diverse aims and allegiances of its ikko followers, Tsang complicates our understanding of ikko ikki as a multifaceted example of how religion and religious belief played out in a society in conflict.