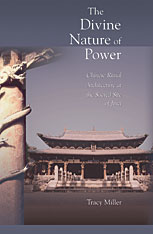 The Divine Nature of Power

Chinese Ritual Architecture at the Sacred Site of Jinci

Built around three sacred springs, the Jin Shrines complex (Jinci), near Taiyuan in Shanxi province, contains a wealth of ancient art and architecture dating back to the Northern Song dynasty (960–1127). The complex’s 1,500-year-long textual record allows us to compare physical and written evidence to understand how the built environment was manipulated to communicate ideas about divinity, identity, and status. Jinci’s significance varied over time according to both its patrons’ needs and changes in the political and physical landscape. The impact of these changes can be read in the physical development of the site.

Using an interdisciplinary approach drawing on the research of archaeologists, anthropologists, and religious, social, and art historians, this book seeks to recover the motivations behind the creation of religious art, including temple buildings, sculpture, and wall paintings. Through an examination of building style and site organization, the author illuminates the multiplicity of meanings projected by buildings within a sacred landscape and the ability of competing patronage groups to modify those meanings with text and context, thereby affecting the identity of the deities housed within them. This study of the art and architecture of Jinci is thus about divine creations and their power to create divinity.