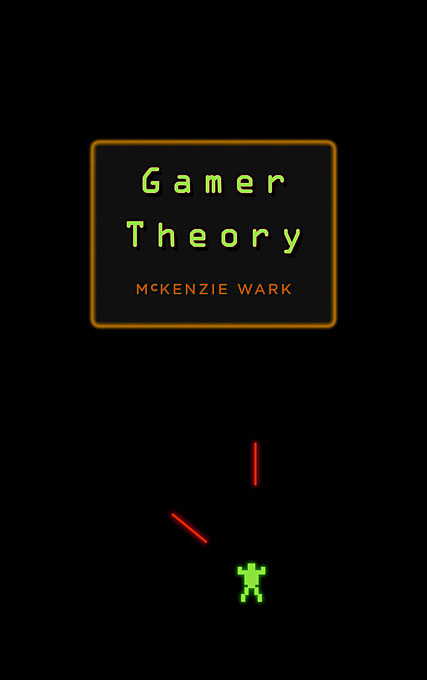 “A crucial addition to a long history of discussion on gaming and play… This is philosophy constructed as and while the author plays the game (which also might include the academic game). This idea is actualised by Wark’s layered breakdown of Gamer Theory into meditations on various digital games like Vice City and SimEarth… It is a distinctive work in that it synthesises aspects from a range of critical discourses that might otherwise have no interest in gaming and play, largely because, as Wark writes: ‘Games are our contemporaries, the form in which the present can be felt and, in being felt, thought through.’”—Terrence Maybury, Media International Australia

“The release of media theorist McKenzie Wark’s new book Gamer Theory is many things at once. If you’re interested in the growth of a new medium, it’s a media academic’s major guide to the key issues. If you’re games-savvy, you are just as likely to recoil in horror at Wark’s analyses. To proclaim that he has simply expanded on his previous work, a hacker manifesto, ignores what gamer theory is—a study in the catastrophe of reading culture. It’s an intensely difficult-to-navigate work but ultimately rewarding for those up to the challenge of the game before them.”—Christian Mccrae, Realtime

“Like all great works, Gamer Theory is formed out of a necessity ‘to describe what being now is.’ In a playful, edgy, and remixological style, Wark opens a new direction in game studies.”—Mark Amerika, author of META/DATA: A Digital Poetics

“Gamer Theory is an amazing book, rich and pointed and powerful, and deserving of multiple rereadings. I cannot recommend Gamer Theory too highly.”—Steven Shaviro

“In Gamer Theory, McKenzie Wark brings his relentlessly playful mind to the undeniably important medium of the videogame. Like a Mario of media studies, Wark powers up his own in-the-trenches videogaming experiences with secret combos from the big guns of critical theory to arrive at a player-centric and culturally savvy understanding of gaming. An idiosyncratic outflanking of current game studies, Gamer Theory takes scholarship of videogames to a brave new level.”—Eric Zimmerman, co-founder and CEO of Gamelab and co-author, with Katie Salen, of Rules of Play and The Game Design Reader