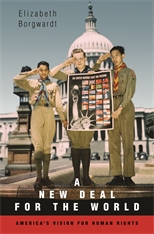 A New Deal for the World

In a work of sweeping scope and luminous detail, Elizabeth Borgwardt describes how a cadre of World War II American planners inaugurated the ideas and institutions that underlie our modern international human rights regime.

Borgwardt finds the key in the 1941 Atlantic Charter and its Anglo-American vision of “war and peace aims.” In attempting to globalize what U.S. planners heralded as domestic New Deal ideas about security, the ideology of the Atlantic Charter—buttressed by FDR’s “Four Freedoms” and the legacies of World War I—redefined human rights and America’s vision for the world.

Three sets of international negotiations brought the Atlantic Charter blueprint to life—Bretton Woods, the United Nations, and the Nuremberg trials. These new institutions set up mechanisms to stabilize the international economy, promote collective security, and implement new thinking about international justice. The design of these institutions served as a concrete articulation of U.S. national interests, even as they emphasized the importance of working with allies to achieve common goals. The American architects of these charters were attempting to redefine the idea of security in the international sphere. To varying degrees, these institutions and the debates surrounding them set the foundations for the world we know today.

By analyzing the interaction of ideas, individuals, and institutions that transformed American foreign policy—and Americans’ view of themselves—Borgwardt illuminates the broader history of modern human rights, trade and the global economy, collective security, and international law. This book captures a lost vision of the American role in the world.