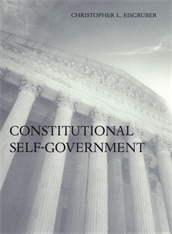 Most of us regard the Constitution as the foundation of American democracy. How, then, are we to understand the restrictions that it imposes on legislatures and voters? Why, for example, does the Constitution allow unelected judges to exercise so much power? And why is this centuries-old document so difficult to amend? In short, how can we call ourselves a democracy when we are bound by an entrenched, and sometimes counter-majoritarian, constitution?

In Constitutional Self-Government, Christopher Eisgruber focuses directly on the Constitution’s seemingly undemocratic features. Whereas other scholars have tried to reconcile these features with majority rule, or simply acknowledged them as necessary limits on democracy, Eisgruber argues that constitutionalism is best regarded not as a constraint upon self-government, but as a crucial ingredient in a complex, non-majoritarian form of democracy. In an original and provocative argument, he contends that legislatures and elections provide only an incomplete representation of the people, and he claims that the Supreme Court should be regarded as another of the institutions able to speak for Americans about justice. At a pivotal moment of worldwide interest in judicial review and renewed national controversy over the Supreme Court’s role in politics, Constitutional Self-Government ingeniously locates the Constitution’s value in its capacity to sustain an array of institutions that render self-government meaningful for a large and diverse people.