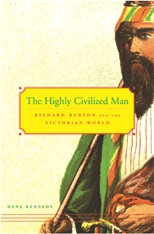 Richard Burton and the Victorian World

Richard Burton was one of Victorian Britain’s most protean figures. A soldier, explorer, ethnographer, and polyglot of rare power, as well as a poet, travel writer, and translator of the tales of the Arabian Nights and the Kama Sutra, Burton exercised his abundant talents in a diverse array of endeavors. Though best remembered as an adventurer who entered Mecca in disguise and sought the source of the White Nile, Burton traveled so widely, wrote so prolifically, and contributed so forcefully to his generation’s most contentious debates that he provides us with a singularly panoramic perspective on the world of the Victorians.

One of the great challenges confronting the British in the nineteenth century was to make sense of the multiplicity of peoples and cultures they encountered in their imperial march around the globe. Burton played an important role in this mission. Drawing on his wide-ranging experiences in other lands and intense curiosity about their inhabitants, he conducted an intellectually ambitious, highly provocative inquiry into racial, religious, and sexual differences that exposed his own society’s norms to scrutiny.

Dane Kennedy offers a fresh and compelling examination of Burton and his contribution to the widening world of the Victorians. He advances the view that the Victorians’ efforts to attach meaning to the differences they observed among other peoples had a profound influence on their own sense of self, destabilizing identities and reshaping consciousness. Engagingly written and vigorously argued, The Highly Civilized Man is an important contribution to our understanding of a remarkable man and a crucial era.