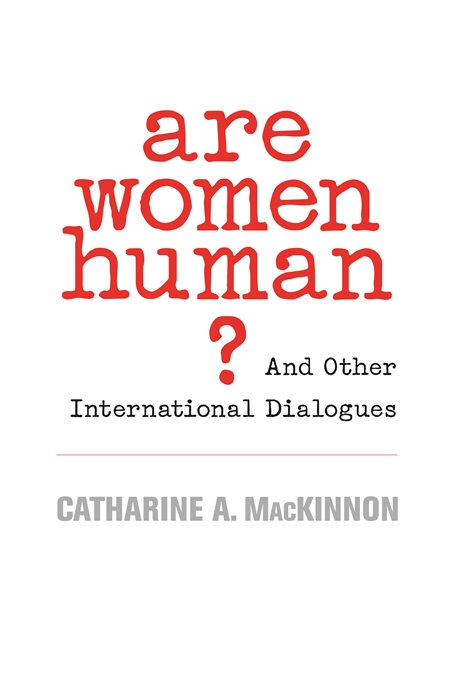 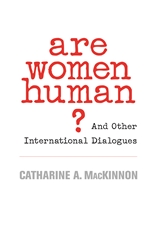 And Other International Dialogues

“A sparkling book, perhaps her finest. Unsettling in the best sort of way, Are Women Human? shows [MacKinnon] to be not only a prodigiously creative feminist thinker who can see the world from a fresh angle like nobody else (and I mean the angle of reality, as opposed to the usual one of half-reality) but also one of our most creative thinkers about international law. As elsewhere in MacKinnon’s work, we find plenty of trenchant and eloquent writing; but we also find more systematic analysis and more extensive scholarship than we sometimes get, and the book is the richer for it. MacKinnon’s central theme, repeatedly and convincingly mined, is the hypocrisy of the international system when it faces up to some crimes against humanity but fails to confront similar harms when they happen to women, often on a daily basis… Are Women Human? is a major contribution both to feminism and to international law… By casting herself as a peace-builder, MacKinnon issues a pointed challenge to her adversaries, who boringly stereotype her as a fierce amazon on the warpath against male liberties. This book is indeed fierce, unrelenting in its naming of abuse and hypocrisy. In a world where women pervasively suffer violence, however, it takes the fierceness of good theory to move us a little closer to peace.”—Martha Nussbaum, The Nation

“Catharine A. MacKinnon is the world’s leading feminist legal theorist, and her work over the past three decades has helped create an entire field of theorizing about gender, the State, and law. Along with the late Andrea Dworkin, MacKinnon has also become one of the major thinkers and activists on the issue of women’s rights in the global arena, particularly regarding the way in which enduring distinctions between the public and the private spheres (in areas such as pornography, for example) sustain a matrix of inequality and exploitation. In this collection of previously published essays and public lectures, MacKinnon focuses on the international legal dimensions of feminist theory. She asks how international law, specifically international human rights protections, might be structured to take account of the uniqueness of crimes against women.”—Charles King, The Times Literary Supplement

“To refer to Catharine A. MacKinnon—the author of 11 brilliant and theoretically rigorous books, professor of law at the University of Michigan, and a fellow at the Centre for Advanced Study at Stanford—as a feminist scholar is somewhat like describing her as a bookish blonde: accurate, but also a little ridiculous. MacKinnon is a towering figure on the world stage, far beyond categorisations that in application, trigger derision or marginalisation. The leitmotif of her work is the correction of social injustice, and her role in shaping perception of quotidian iniquities, incalculable… She has dedicated her life to creating a world in which we all accept, or are made to accept, responsibility for the dignity and wellbeing of our fellows. Are Women Human? only furthers her success.”—Antonella Gambotto-Burke, The South China Morning Post

“MacKinnon’s writing is astonishingly powerful, combining a compelling air of authority and outrage with a sense of despair at the enormity of women’s domination by men. It is hard to disagree with her central thesis that much violence against women has the severity of a human rights violation. Moreover, MacKinnon provides a compelling critique of the doctrine that only states can violate international law, and that only transborder atrocities merit international intervention… Are Women Human? is a book that deserves to be widely read. It contains important empirical and legal analysis of particular conflicts… It develops MacKinnon’s own feminist philosophy, building on the approach developed in her earlier works and demonstrating how feminism should respond to international issues. And it engages directly with contemporary debates about culture, global justice, human rights, international law, and the demands of equality.”—Clare Chambers, Ethics & International Affairs

“[MacKinnon] is undeniably one of feminism’s most significant figures, a ferociously tough-minded lawyer and academic who has sought to use the law to clamp down on sexual harassment and pornography.”—Stuart Jeffries, The Guardian

“Over the past 25 years, Catharine MacKinnon has changed the face of feminist legal theory. A law professor at the University of Michigan, she is, as one reviewer notes, ‘a famously polarizing figure’… A new collection of MacKinnon’s speeches and writings, Are Women Human? And Other International Dialogues takes note of the political work she has done in Canada, the U.S., and abroad, and asserts her recent approach to accountability in the global human rights arena. Discussing ritualized forms of violence conducted by military forces in Bosnia–Herzegovina and other regions, she argues that international human rights measures can be applied to halt such forms of violence against women.”—Susan G. Cole, Herizons

“In this collection of essays, the pioneering feminist lawyer calls for international laws to protect women from the denial of property rights, the deployment of rape in war and other brutalities that flow from male oppression.”—Ms. Magazine

“MacKinnon’s bracing essays globalize her signature ideas—the hidden power behind ‘neutral’ rules, the role of male privilege in the construction of hierarchal rules and law-making processes, the invisibility of those subordinated by the public/private divide, the flaws in Aristotle’s concept of equality—with devastating results for the heretofore complacent field of international law. These stinging rebukes to how international law is thought about and practiced, produced over little more than a decade, demonstrate the transformative potential of jurisprudence that seeks to engage (and change) the real world. MacKinnon’s thoughtful critiques of matters as diverse as the handling of class actions to the selective choices reflected in the war on terror provide indispensable reading for anyone who cares about how nations (mis)behave. They provide the ‘shock and awe’ that the Bush Administration promised but never delivered.”—José E. Alvarez, Hamilton Fish Professor of Law & Diplomacy, Columbia Law School

“Any work from Catharine MacKinnon is bound to be provocative and exciting. Here is a feast, a collection of work showing how the author’s ideas about women’s rights have developed over 20 years. The simple question ‘are women human?’ leads us to see more clearly a male dominated world which, since time immemorial, has tolerated, condoned and even encouraged gender based violence and abuse. No area is spared the damning spotlight, from sexual harassment to pornography, from rape and violence to terrorism and armed conflict. But this is no hand-wringing exercise. The author’s passion for true equality, her analytical skills and her creativity shine from these pages. Her new approaches to accountability have inspired many women to assert their rights and have found their way into domestic law and international instruments. All this, and much more in a truly awesome book.”—Elizabeth Evatt, former Chair of the United Nations Committee on the Elimination of All Forms of Discrimination against Women and former Member of the Human Rights Committee

“Why does the war on terrorism after 9/11 offer lessons for struggles against domestic violence? As Catharine MacKinnon explores this and other international legal questions about genocide, rape, and women’s status, these essays supply ample evidence for her stature as one of the most original and provocative legal theorists of our age. The essays gathered here are quintessential MacKinnon and reflect her journeys to Bosnia, Canada, Sweden, and across the terrains of international law, and gender politics, and the injustices that lie beyond the power of any single nation.”—Martha Minow, Jeremiah Smith, Jr., Professor, Harvard Law School, author of Between Vengeance and Forgiveness: Facing History after Genocide and Mass Violence