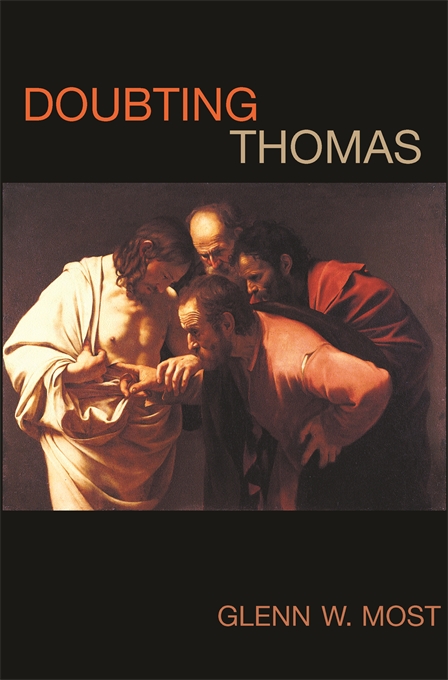 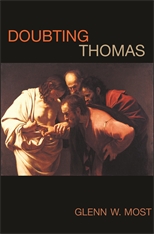 “The story of Doubting Thomas [is] examined at length in this learned and fascinating book… [Most’s] account of the Caravaggio, which you can see only if you’re willing to go to Potsdam, is so splendidly intelligent and acute that one can make do with the photograph provided.”—Frank Kermode, London Review of Books

“Glenn W. Most’s fascinating study Doubting Thomas asks us to reconsider Thomas and his need to touch. In this faithless disciple from John’s Gospel Most finds a much more complicated figure—so complicated, he posits, that this episode is misread and almost every painting since the 1300s has gotten Thomas wrong. Most suggests how Thomas’ presence is more subtle and more deserving of our sympathy.”—Nick Owchar, The Los Angeles Times Book Review

“In the best sense of the word Most’s book is exactly what his readers expect. Instead of adding just another interpretation to the numerous existing ones, Most analyses the trodden paths of interpretation from a higher plane. This time Most deals with the apparently well known story of Doubting Thomas. The central question of the study is not simply whether or not Thomas actually touches the wounds, but how it was understood by interpreters throughout the history of reception. Most follows up the threads that start from John’s account and lead him through centuries of European history and beyond.”—Philipp Brandenburg, Bryn Mawr Classical Review

“Preachers struggling to find a new angle on John’s account of Jesus’ appearance to Thomas will find much of profit in Glenn Most’s attractively written Doubting Thomas, as will anyone willing to read John’s narrative with the attention that it deserves… Most offers a wealth of insights that will complement those of the standard commentaries on the fourth gospel… Most is adept in discussing both early Christian writings in which Thomas takes on a very significant role and also the reflections of patristic, medieval, and renaissance commentators.”—The Church of England Newspaper

“Most’s book is a fascinating account of the journey of the figure of Doubting Thomas through Western history… Doubting Thomas is a must for libraries, and undergraduate libraries in particular. It would make an interesting addition to any course on the history of Christianity or Western culture.”—Paul B. Duff, Journal of Religion

“In weaving a narrative of the cultural history of reception and transmission of one of the most arresting, and misunderstood, pericopes in the New Testament, the author provides the reader with a lively analytical study of central questions of faith and doubt, skepticism and persuasion synchronically and diachronically. I don’t know of another book quite like this one. It’s well-written, in a lively, learned style and is a genuine pleasure to read.”—Ronald Cameron, author of Redescribing Christian Origins

“Glenn Most takes us on a magical mystery tour through two millennia of Doubting Thomas’s afterlife. This artful and erudite book illuminates a vast range of texts, commentaries, and paintings. Provocative, minutely observant, and compulsively readable, this study sets a new standard for what it means to study the reception of any passage in a canonical book.”—Anthony Grafton, author of The Footnote: A Curious History

“An intriguing book that explores a number of issues that go beyond its immediate subject.”—John W. O’Malley, author of Four Cultures of the West

“The nature of belief, its relation to seeing and to touching, is at the center of this fascinating and strikingly lucid account of the problematic New Testament figure of Thomas, better known as Doubting Thomas. Whether exploring the vexing ambiguities in Chapter 20 of the Gospel of John or the subtle differences in the iconography of their representation from the Middle Ages to Caravaggio in the late Renaissance, Glenn Most is always insightful, illuminating, engaging. This is a terrific book.”—Mark Strand