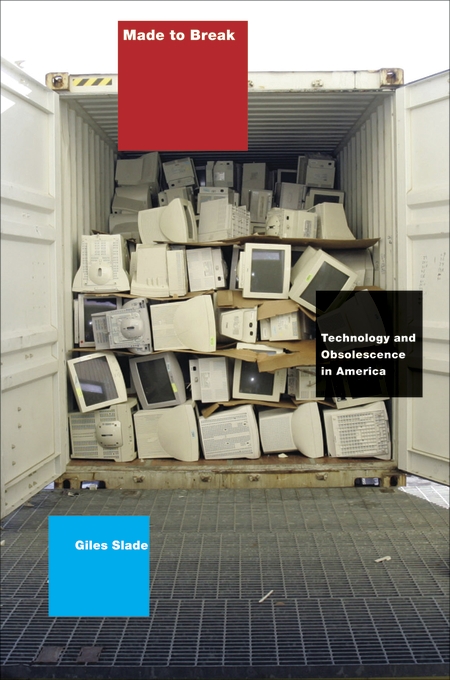 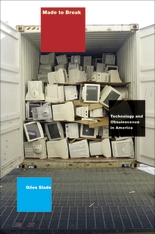 Technology and Obsolescence in America

“In Made to Break, Giles Slade provides a well-researched and readable account of the history of capital production and product consumption in America over the past century.”—Austin Williams, The Times Literary Supplement

“Made to Break is both entertaining and thought-provoking.”—John Emsley, Nature

“Made to Break: Technology and Obsolescence in America is a fascinating, vexing, even enraging history of our ‘throw-away ethic.’ Drawing on a wealth of rarely consulted primary sources and writing with lucidity and vigor, Slade documents the creation of consumer culture and the engineering of obsolescence… Informative and entertaining, Slade reveals the thinking behind so much of what we take for granted today in terms of branding, extravagant packaging, ever-changing styles and the many forms of overt and covert advertising that dominate our media and public spaces. But the real shock is found in his thoroughly researched revelations regarding ‘planned obsolescence,’ manufacturing techniques used to ‘artificially limit the durability of a manufactured good in order to stimulate repetitive consumption.’ This is the secret of the made-to-break strategy, a shameful, shadow side of American know-how… Not only is Made to Break rich in history and analysis, it also contains vivid profiles of seminal inventors, advertising pioneers, inventive business moguls and prescient social critics. Creativity and greed, innovation and irresponsibility, malevolence and hubris, conformity and dissent—all combine in a tale of American ingenuity run amok… We depend on writers like…Giles Slade…—writers working in the great tradition of bold and rigorous American thinkers, observers, critics and muckrakers from Henry David Thoreau to Upton Sinclair, Aldo Leopold, Rachel Carson and Bill McKibben—to shake us awake, dispel the fever dream of consumerism and reveal the true cost of our love for technology and our obsession with machines and disposable goods. And as precise as…Slade…[is] in [his] coverage of the garbage crisis, [he is] equally meticulous in [his] explications of solutions.”—Donna Seaman, The Chicago Tribune

“Giles Slade has produced a riveting piece of cultural history to explain the veritable mushroom cloud of electronic waste threatening our planet, while hinting suggestively at why the public seems so detached from the crisis and even its role in creating it… [An] engrossing tale… [Slade is] a thinker worth heeding.”—Heather Menzies, The Globe and Mail

“The propensity to buy, discard, and buy again is no accident, explains Giles Slade in the engaging Made to Break, which chronicles the history and consequences of Americans’ obsession with the next new thing.”—Elizabeth Grossman, Grist

“[Slade’s] book is not just about the manufacture of modern must-haves, but how bad they are for the planet when they become must-bins.”—Shane Hegarty, The Irish Times

“A primer for the techno-curious, Giles Slade’s Made to Break: Technology and Obsolescence in America outlines the rapid growth of our waste culture beginning with 19th-century paper shirt collars and safety razors. As Americans grew nonchalant about throwing away common items, manufacturers developed advertising practices convincing consumers that larger belongings (like cars), too, had shelf lives, justifying the ‘throwaway ethic’ that pervades modern society… Slade keeps the topic of technological obsolescence interesting with engrossing factoids and anecdotes while sounding an alarm for the e-obsessed.”—Stacy Klein, Playboy

“Giles Slade traces the roots of our love affair with ‘repetitive buying’ in a new book, Made to Break: Technology and Obsolescence in America. It’s an eye-opening look at corporate greed and at the statistics of American consumerism.”—Faye B. Zuckerman, The Providence Journal

“[A] troubling and important book: At least 90 percent of the 315 million still-functional personal computers discarded in North America in 2004 were trashed, and more than 100 million cell phones—200,000 tons’ worth—were thrown away in 2005. Things are likely to get much worse in the near future, and this assessment frames Slade’s engaging examination of the various kinds of obsolescence that contribute to the problem.”—The San Francisco Chronicle

“Each year consumers replace old but still-functioning cell phones, televisions, computers, and other electronic items with newer, sleeker models. The discarded items end up in landfills, where they slowly leach their toxic components. Slade examines how obsolenscence became a way of life in the United States.”—Science News

“Best book for someone whose web browser just doesn’t work anymore: Made to Break by Giles Slade. The Richmond, B.C. author’s book traces the history of planned obsolescence back to the paper shirt-collar and the mass-market wristwatch. It’s lively, thorough, and might just make you reconsider the beauty of the iPod.”—The Tyee

“Computers, TV sets, and, especially, cell phones are treated as disposable in our society, but sending them to landfills will be hugely injurious to our planet down the road. In this book, packed with thought-provoking digressions, Giles Slade wonders why we don’t demand durability in our material goods.”—Rebecca Wigod, The Vancouver Sun

“Giles Slade’s book is an engaging overview of the American consumer’s relationship to disposability, fashion, innovation, and ‘obsolescence’ in mass-produced commodities of all sorts during the twentieth century. It will be useful as an introduction to these issues for casual readers and secondary students.”—Greg Downed, American Historical Review

“Slade’s fresh and thought-provoking analysis of conspicuous consumption and its unintended environmental consequences closes with a clarion call for combating e-waste.”—Donna Seaman, Booklist

“The flip side of America’s worship of novelty is its addiction to waste, a linkage illuminated in this fascinating historical study. Historian Slade surveys the development of disposability as a consumer convenience, design feature, economic stimulus and social problem, from General Motors’ 1923 introduction of annual model changes that prodded consumers to trade in perfectly good cars for more stylish updates, to the modern cell-phone industry, where fashion-driven ‘psychological obsolescence’ compounds warp-speed technological obsolescence to dramatically reduce product life-cycles. He also explores the debate over ‘planned obsolescence’ decried by social critics as an unethical affront to values of thrift and craftsmanship, but defended as a Darwinian spur to innovation by business intellectuals who further argued that ‘wearing things out does not produce prosperity, but buying things does.’ Slade’s even-handed analysis acknowledges both manufacturers’ manipulative marketing ploys and consumers’ ingrained love of the new as motors of obsolescence, which he considers an inescapable feature of a society so focused on progress and change… Slade’s lively, insightful look at a pervasive aspect of America’s economy and culture make this book a keeper.”—Publishers Weekly