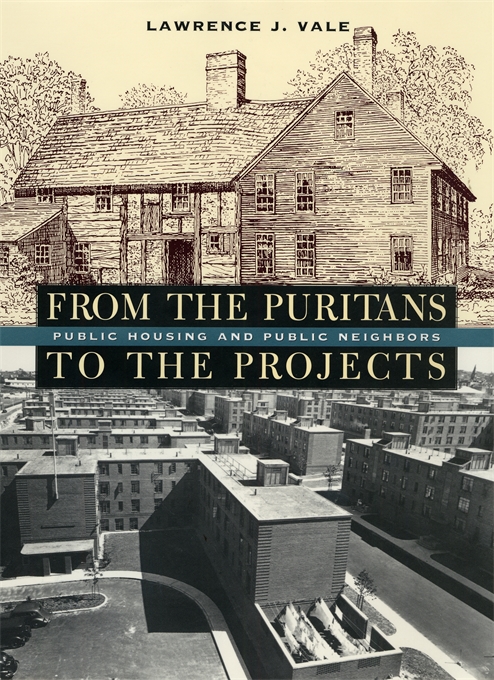 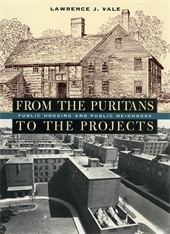 From the Puritans to the Projects

“In his history of housing and poverty in Boston, Vale shows that the public housing program was intended to be something quite different from what it became. More important, public housing originally was not meant for the very poor… Economic conditions, Vale points out, enabled public housing officials to cull the most stable and best-paid low-income tenants… Not surprisingly, tenants in these years were model citizens who organized themselves into a wide array of volunteer organizations and took pride in maintaining clean and attractive buildings and grounds in the projects. The chief problem was that aspiring tenants tended to prosper, earning more than the rules allowed and forcing reluctant officials to evict them.”—Alexander von Hoffman, The American Prospect

“From the Puritans to the Projects is a comprehensive history of urban housing in Boston and, more broadly, of the urban poor’s attempts to find housing in America during the past 350 years. Beginning with Puritan almshouses in the seventeenth century, Vale traces the arguments and policies concerning housing for the economically marginalized in America, and poses questions about the practice of building high-rises to warehouse the poor.”—Doubletake

“A book as good as this certainly reaffirms the merits of solid and rigorous academic study… Vale details Boston’s long public housing trajectory starting off with institutions such as Almshouses and the ‘Houses of Industry’, before emerging in the 19th century with new variants such as the ‘public lands’ policy, the sanctification of the single family home and various attempts at tenement reform… This is academic insight at its best.”—Douglas Robertson, Roof

“Vale is very insightful at decoding…half-conscious pop-culture signs and symptoms… [The book is] very informative and worthwhile for anyone interested in the tortuous history of land use policy and urban politics.”—The Federal Lawyer

“[From the Puritans to the Projects] is an impressive work, both in terms of content and presentation… [It is] a major contribution to recent scholarship on housing, urban history and public policy; its shelf-life will be long.”—Kristin M. Szylvian, H-Net Reviews

“Vale, an urban studies and planning professor, examines more than three centuries of Boston’s provision for ‘the public neighbor,’ exploring ‘shifting relationships among the state, the market, and civil society,’ which reflect policy makers’ profoundly mixed motives. From indoor and outdoor relief to tenement reform and settlement houses to urban renewal and massive housing projects, genuine desire to help the poor has always been interwoven with a demand for tighter social control. Increasingly the geographical placement of public housing has sought to insulate the nonpoor from social problems of the public neighbor. A fascinating analysis of how one city has manifested ‘our collective ambivalence’ about citizens unable to provide adequate housing for themselves.”—Mary Carroll, Booklist

“The strength of Vale’s book is the depth of his research into the actual operation of the Boston Housing Authority in implementing these policies, particularly through tenant selection. No other study offers such a revealing look inside the operation of the public housing bureaucracy.”—J. R. Breihan, Choice

“From the Puritans to the Projects explores the history of Boston’s efforts to provide for its poor, focusing particularly on its experience with public housing and the story of how the housing project, which when it began was eagerly sought by politicians, communities, and tenants, became in time something to be just as passionately avoided. It provides a finely detailed social history of how public housing was overwhelmed by errors, contradictions, and problems, and is a worthy addition to the many distinguished studies of Boston, as well as to the history of public policy in America.”—Nathan Glazer, author of The Limits of Social Policy and We Are All Multiculturalists Now

“Lawrence Vale’s major study throws new and important light on the contradictions and dilemmas of American public housing policy over the past half-century, as they worked themselves out in one of the nation’s great cities. It has vital messages both for scholars of public policy, planning, and urban studies, and for urban policy-makers, both in the United States and the wider world. This is a major contribution to the urban literature.”—Sir Peter Hall, author of Cities in Civilization: Culture, Innovation, and Urban Order

“In tracing the story of public housing from Puritan times to the present, Professor Vale pays special attention to the spatial dimensions of poverty management. His is not a mechanical tale of segregation, but a careful presentation of the placement of the poor in response to the policies of aid and discipline. This book, at once both an excellent history and an unusually thorough Boston case study, illustrates the continuing cultural and political ambivalence that plays itself out in ever-changing environments for the poor.”—Sam Bass Warner, Jr., author of Streetcar Suburbs