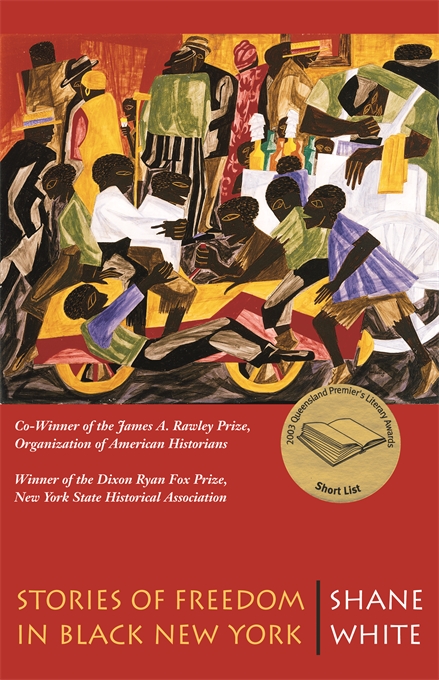 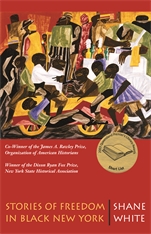 “A treasure of historical thinking, a beautifully composed study, an extraordinary book to read… As moving and erudite a meditation as you will find on African Americans at a historical juncture when things might have turned out differently. White’s point of departure is the wave of optimism and hope that surged through the black community on the heels of freedom, conferring an ‘edgy vitality’ on street life, politics, colloquial speech, and theater in the 1820s and 1830s… The core of White’s account is the story of James Hewlett, the pre-eminent black Shakespearean of his day, who played Richard in the African Company’s production. With extraordinary deftness and perseverance, White has put together his biography from faint traces that Hewlett left in the historical record.”—Christine Stansell, The New Republic

“Shane White’s short but creative book about ‘slavery and its lingering death’ and the struggle over the ‘boundaries of freedom’ listens closely to black New Yorkers’ stories, evocatively bringing them to life for contemporary readers.”—Eric Arnesen, The Chicago Tribune

“Shane White’s superb history of black life in New York during the early 19th century examines African-American culture from the bottom (instead of from the top) by focusing on the audacious African Company, a theatrical group that dared to present Shakespeare with non-white casts for non-white audiences. The author also describes the growth of minstrels, black dialect and social opportunity in this extremely important book.”—The Dallas Morning News

“This is a rich and insightful book. Shane White draws on his extensive knowledge of black New York and on painstaking research to reconstruct two obscure stories. One is of the African Company, the first theatrical group to be conducted by African American, which functioned in New York City from 1821–23… The other is of one of its actors, James Hewlett…who was for a time the most prominent black actor working in the United States… White’s accounts of Hewlett and the theatre are fascinating in themselves, but the real interest lies in the skill with which he weaves them into the bigger story of African New York at the end of slavery… Shane White is to be congratulated for so ably recovering that moment of possibilities.”—Christopher Clark, History

“The early decades of the nineteenth century were turbulent as blacks and whites struggled with the end of slavery in New York. It was an era marked by race riots, forced segregation, and degrading depictions of black life, even as whites demonstrated a voyeuristic fascination with New York’s black citizenry… [White] focuses on a black theater group, its leading actor, James Hewlett, and a Jewish newspaper editor, Mordecai Noah, as telling representatives of how blacks sought to express their freedom and whites sought to keep them in their place… White captures the vibrancy and difficulties of the era when a distinct black culture began to emerge, and draws parallels to the current American cultural mélange and contemporary racial attitudes.”—Vanessa Bush, Booklist

“Claiming New York’s public space as their own through balls, music, fashion, and language, Hewlett and his fellow actors are presented as both theater pioneers and forerunners of the dynamic and exhilarating New York we know today… [A] thought-provoking analysis.”—Sherri Barnes, Library Journal

“New York abolition, which was formally granted in 1817 but not fully carried out until July 4, 1827, complicated the social structure of the state and city during an awkward, staggered process. During this period a theater troupe called the African Company emerged. White…reconstructs the vital life of this troupe in the New York of the 1820s, situating its struggles within the larger context of a sometimes exuberant yet uneasy time… [White] makes a persuasive case for the company’s cultural importance, particularly as a forerunner of the Harlem Renaissance that was still a century away.”—Publishers Weekly

“The African Grove Theater is to African American performing arts what Mother Bethel is to African American religion. Stories of Freedom in Black New York is the best history of that landmark institution, while also tracing the transit of black people from slavery to freedom in New York. It sparkles with original insights into life in the new Republic.”—Ira Berlin, author of Many Thousands Gone: The First Two Centuries of Slavery in North America

“Freedom is more than words. It is felt, experienced, performed. Shane White’s remarkable portrait of New York during emancipation captures African Americans struggling to express and define freedom for themselves—in the streets, the courts, and on stage. White brings his astonishing skills as a social historian to reveal a city engaging the most fundamental political questions of the day.”—Robin D. G. Kelley, author of Freedom Dreams: The Black Radical Imagination

“Shane White demonstrates that the struggle for meaningful freedom by recently emancipated blacks in early 19th century New York occurred not only in legislative halls but also in cultural venues where black New Yorkers created a public style through music, dance, street parades, and a theatrical company that informed the entire populace of their determination to be players in all aspects of the city’s life. It is an intensely human story that will enlighten all who read it.”—Lawrence W. Levine, author of Highbrow/Lowbrow: The Emergence of Cultural Hierarchy in America

“With Stories of Freedom in Black New York, Shane White reinforces his position as one of the most innovative interpreters of African American culture. In this stunning work, deeply researched and narratively compelling, White explores theatrical life to deepen our appreciation of the diverse ways in which black New Yorkers defined and manifested their newly won freedom.”—Leon Litwack, author of Been in the Storm So Long: The Aftermath of Slavery

“A splendid book. Stories of Freedom in Black New York digs deep into the antebellum city, and unearths far more treasures than scholars have assumed existed. Its probing investigation of the subtleties of race relations, its intertwining of theater and everyday life, its exhumation of language, perceptions, and folkways, are remarkable.”—Mike Wallace, coauthor of Gotham: A History of New York City to 1898