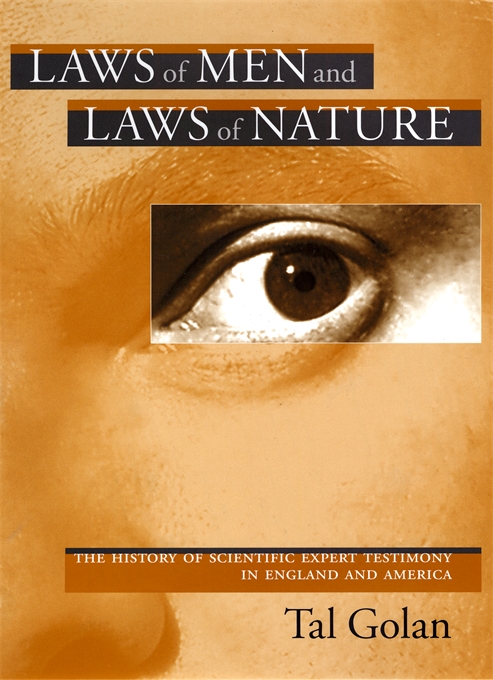 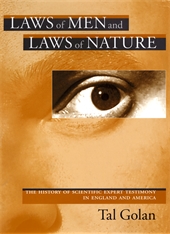 Laws of Men and Laws of Nature

The History of Scientific Expert Testimony in England and America

“[An] engaging history of expert evidence in the Anglo-American courtroom… Laws of Men and Laws of Nature is both well written and wide-ranging, traveling from 18th-century England to early 20th-century America, from patent law to microscopy to experimental psychology… An extremely able, much-needed account of the tangled, troubled connections between the world of law and the world of science.”—Jennifer L. Mnookin, American Scientist

“This fascinating history of scientific expert testimony explores the relations between science and law in the courts of England and America over the past two centuries. It covers the late-18th-century court case over the supposed causes of the decay of Wells harbour in Norfolk, on England’s east coast; the difficulties of distinguishing human from animal blood in the 19th century; the gradual acceptance of X-ray, photographic and other ‘silent witness’ evidence in the 20th century; and the unsettled debate over the accuracy of lie-detector tests… For anyone who finds themselves at the ever-controversial interface between science and the law, this book provides invaluable context and a most interesting read.”—New Scientist

“Trials are the stuff of Tal Golan’s engaging narrative as he briskly guides his readers through some of the formative moments in a century or so of scientific expert testimony in English and American common law.”—Sheila Jasanoff, Nature

“[An] original and thoughtful [history] of the fitful relationship between science and the law from its roots in the 18th century common law.”—Bettyann Holtzmann Kevles, Science

“This book will be enjoyed not only for its insight into the development of expert evidence but also into the history of industrial relations.”—Oliver Popplewell, The Times Higher Education Supplement

“Tal Golan’s Laws of Men and Laws of Nature is an important historical examination of scientific expert testimony in Common Law courts. Golan accomplishes this through an examination of the relationship between the institution of law and the institution of science… Unfortunately, their relationship has gone largely ignored by historians of each field respectively … Tal Golan’s book contributes importantly to our understanding of expert testimony, and, more broadly, the relationship between law and science. Furthermore, it is essential for understanding the current status of expert testimony in trials… Readers will appreciate the book’s historical detail. Golan’s retelling of history is excellent: not burdened with minutiae but sufficiently colorful to maintain interest… Golan effectively argues that law and science evolved concomitantly, and those interested in the relationship between these two institutions will find this book indispensable.”—Christopher Salinas, Argumentation and Advocacy

“Professor Golan has produced an important work, a long-overdue historical addition to the scientific evidence literature. It is a must-read, not only for scientific evidence scholars, but also for anyone seeking a richer understanding of the continuing and frustrating conflicts between law and science.”—Edward K. Cheng, Michigan Law Review

“Marvelous… Tal Golan, a historian of science at the University of California at San Diego, takes us on an intimate tour of the centuries-long love–hate relationship between science and the law… Mr. Golan’s book is especially timely, as in America we seem more suspicious than ever of the role of science in the courtroom. It is instructive, therefore, to take a stroll through history in this book, and see the many ways that bringing science into the courtroom served the greater good.”—Carla T. Main, New York Law Journal Magazine

“In this witty book, Tal Golan shows how the Anglo-American legal system accommodated itself partially and reluctantly to the laws of science and the agitation of scientists. In style and substance, Laws of Men and Laws of Nature shines as a work in the history of science and eclipses most contemporary science studies.”—J.L. Heilbron, author of The Sun in the Church: Cathedrals as Solar Observatories

“In disputes ranging across health, the environment, regulation, crime, and myriad other features of contemporary society, science is ubiquitous in the courts. In compelling prose, Tal Golan brilliantly illuminates the historical roots of the interplay between science and the law, showing that it has a history going back to the late 18th century and revealing how each affected the other, with the legal process calling forth expert research and the claims of scientific expertise helping to shape the rules of evidence. This is a major, authoritative work, of groundbreaking importance.”—Daniel J. Kevles, author of The Baltimore Case: A Trial of Politics, Science, and Character