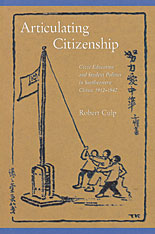 At the genesis of the Republic of China in 1912, many political leaders, educators, and social reformers argued that republican education should transform China’s people into dynamic modern citizens—social and political agents whose public actions would rescue the national community. Over subsequent decades, however, they came to argue fiercely over the contents of citizenship and how it should be taught. Moreover, many of their carefully crafted policies and programs came to be transformed by textbook authors, teachers, administrators, and students. Furthermore, the idea of citizenship, once introduced, raised many troubling questions. Who belonged to the national community in China, and how was the nation constituted? What were the best modes of political action? How should modern people take responsibility for “public matters”? What morality was proper for the modern public?

This book reconstructs civic education and citizenship training in secondary schools in the lower Yangzi region during the Republican era. It also analyzes how students used the tools of civic education introduced in their schools to make themselves into young citizens and explores the complex social and political effects of educated youths’ civic action.