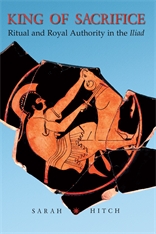 Ritual and Royal Authority in the Iliad

Descriptions of animal sacrifice in Homer offer us some of the most detailed accounts of this attempt at communication between man and gods. What is the significance of these scenes within the framework of the Iliad? This book explores the structural and thematic importance of animal sacrifice as an expression of the quarrel between Akhilleus and Agamemnon through the differing perspectives of the primary narrative and character speech. In the Iliad, animal sacrifice is incorporated into the primary narrative to bolster the royal authority of Agamemnon and further emphasize Akhilleus’ isolation. The sacrifices embedded in character speech express frustration with the failure of reciprocity and the inability of sacrifice to influence the course of human events.