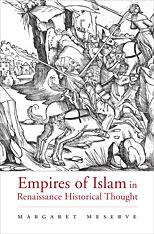 “Empires of Islam is the product of the most painstaking research. There is not a byway which Margaret Meserve has not followed to trace the intricate debates of the time. But the contribution made by her book goes further than the polemics centered on the origin of the Turks. It helps us to reassess humanist historiography in its broadest sense.”—Alastair Hamilton, The Times Literary Supplement

“This erudite and elegant book explores the efforts of Renaissance humanists to understand the Ottoman Turks and the world they came from. Using rich evidence, much of it not studied before, Meserve teaches us a great deal about the transmission, use, and misuse of historical and political information in modern Europe’s first public sphere.”—Anthony Grafton, Princeton University

“A superb and original study, impressively researched and cogently argued, on a significant aspect of humanist scholarship. It will be of interest to scholars in Renaissance, late medieval, early modern, Ottoman, Turkish, and Islamic studies, as well as a broader audience of readers who follow the growing literature on European views of other societies.”—Cemal Kafadar, Harvard University

“Meserve’s achievement is brilliant and important on several levels. She has given us what will become a much cited study on early Western ‘orientalism.’ She has enormously enriched our understanding not only of Renaissance humanism, but also of the relationship between the humanists and their medieval predecessors, pointing to a reconsideration of what is traditionally viewed as medieval and what is viewed as Renaissance. For decades to come, this will serve as a standard work on the humanist understanding of the Turk.”—John Monfasani, State University of New York at Albany