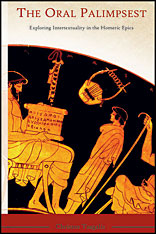 Exploring Intertextuality in the Homeric Epics

Oral intertextuality is an innate feature of the web of myth, whose interrelated fabrics allow the audience of epic song to have access to an entire horizon of diverse variants of a story. The Oral Palimpsest argues that just as the erased text of a palimpsest still carries traces of its previous writing, so the Homeric tradition unfolds its awareness of alternative versions in the act of producing the signs of their erasure.

In this light, “Homer” reflects the concerted effort to create a Panhellenic canon of epic song, through which we can still retrieve the poikilia (roughly, “dappled, embroidered variation”) of various interwoven fabrics belonging to recognizable song-traditions or even older Indo-European strata.