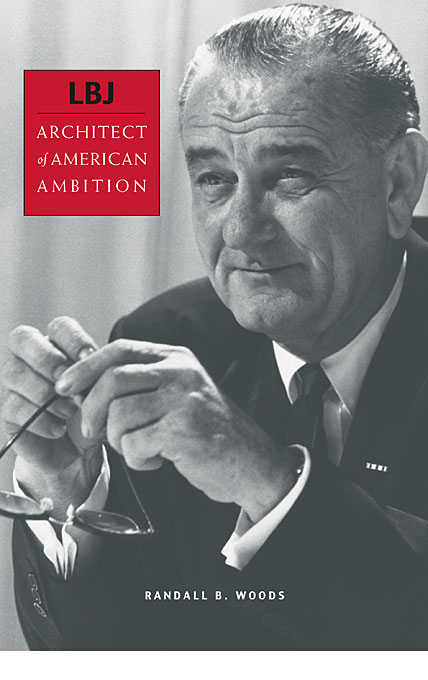 “In his masterful new biography, Randall B. Woods convincingly makes the case for Johnson’s greatness—as the last American president whose leadership achieved truly revolutionary breakthroughs in progressive domestic legislation, bringing changes that have improved the lives of most Americans. In this compelling, massive narrative, Woods portrays Johnson fairly and fully in all his complexity, with adequate attention to flaws in his character and his tragic miscalculations in Vietnam… In illuminating detail, Woods describes the enormous political skills with which Johnson, in quiet partnership with civil rights leaders, persuaded Congress to secure the basic freedoms of African Americans. Woods reminds us that dozens of government benefits and protections that Americans take for granted today were won in the 1960s principally because of LBJ’s vision, legislative mastery and determination… Woods follows in the footsteps of LBJ’s most reliable earlier biographers—Ronnie Dugger, Doris Kearns Goodwin, and Robert Dallek—but makes his own unique contribution to the Johnson literature with a fresh, probing interpretation of the influences and ideals that shaped Johnson and his presidency… The book’s strengths include a balanced narrative, graceful prose and Woods’s nuanced understanding of Southern politics and culture.”—Nick Kotz, The Washington Post Book World

“In writing LBJ: Architect of American Ambition, Woods has produced an excellent biography that fully deserves a place alongside the best of the Johnson studies yet to appear. He is more sympathetic and nuanced than Caro, more fluid and (despite the significant length of his book) more concise than Dallek—and equally scrupulous in his use of archives and existing scholarship. Even readers familiar with the many other fine books on Johnson will learn a great deal from Woods. Unlike all but a few Johnson biographers, Woods is himself a Southerner, and has a particularly good understanding of the nexus of race, class, family and religion that shaped Johnson’s life… Among Woods’s many achievements in this fine biography is to allow us to see not only the enormous, tragic flaws in this extraordinary man, but also the greatness.”—Alan Brinkley, The New York Times Book Review

“This is an absorbing portrait of a man who was as stand-and-deliver as his plain-speaking persona suggested but also a highly complex, driven individual who not only sought power but sought to do something with it.”—Steven Carroll, The Age

“Lyndon Baines Johnson was a complex man who helped shape extraordinary times… Woods has created a full and well-balanced biography of an icon that manages to feel fresh… The LBJ of this book has more light than darkness—a contrary but deeply compassionate individual who was often two steps ahead of everyone else in the room, and who was undone by the times in which he lived.”—Carol Iaciofano, The Boston Globe

“In little more than five years, Lyndon Baines Johnson probably did more to reform and repair American society than anyone else in history. Yet, instead of being memorialized as a hero, LBJ is more often remembered as a slimy manipulator whose good intentions were sunk in the quagmire of a needless war. But as LBJ: Architect of American Ambition, an outstanding new biography by Randall B. Woods, reminds us, the career and legacy of this extraordinarily complex Texan can hardly be summarized in a sentence… LBJ leaves us with a fuller picture of this ‘accidental president’ and a greater appreciation of him as a noble failure or—perhaps more accurately—a great man with some king-size flaws.”—Randy Dotinga, The Christian Science Monitor

“Randall Woods has produced a magnificent portrait of Johnson that, while candid in showing the president’s flaws, is [also] sympathetic.”—Cary Clack, The Cleveland Plain Dealer

“Why…do we need another biography of Lyndon B. Johnson? The answer is that Johnson was so complex that every new biographer willing to do the tough spadework of original research discovers fresh layers of Johnsonian reality to explain, new psychological and political corridors to explore. Such is the case with this excellent new work by University of Arkansas historian Woods. Woods finds Johnson’s key motivation to be largely altruistic, emerging from righteous outrage over the poverty and racism he’d witnessed while growing up in Texas. Woods serves up a Johnson who is less cynical, less self-serving and more heroic and tragic than the man portrayed elsewhere. Woods’s Johnson is a man who saw his greatest personal ambitions realized with the Civil Rights Acts of 1957 and 1964, and the Great Society programs. Not inappropriately, Woods concludes his eloquent and riveting account by quoting Ralph Ellison, who noted that Johnson, spurned at the end of his life by both liberals and conservatives, would ‘have to settle for being recognized as the greatest American President for the poor and for the Negroes, but that, as I see it, is a very great honor indeed.’”—Publishers Weekly (starred review)

“Woods’s single volume evenhandedly condenses the complexities and controversies associated with the thirty-sixth president of the U.S. …Raised in the populist tradition, LBJ cut his political teeth as an all-out New Dealer. But he shrewdly knew that the ambitions he harbored for himself and American society would never be realized without placating conservatives of various kinds—economic, segregationist, or anticommunist. In this fact of Johnson’s political life, which induced some to perceive him as a malodorous wheeler-dealer, Woods detects a remarkable consistency, an inwardly liberal LBJ whose outwardly moderate politics were an expression of his mastery of political calculus… Thorough, astute, and readable.”—Gilbert Taylor, Booklist