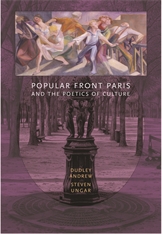 Popular Front Paris and the Poetics of Culture

The story of Paris in the 1930s seems straightforward enough, with the Popular Front movement leading toward the inspiring 1936 election of a leftist coalition government. The socialist victory, which resulted in fundamental improvements in the lives of workers, was then derailed in a precipitous descent that culminated in France’s capitulation before the Nazis in June 1940. Yet no matter how minutely recounted, this “straight story” clarifies only the political activity behind which turbulent cultural currents brought about far-reaching changes in everyday life and the way it is represented.

In this book, Dudley Andrew and Steven Ungar apply an evocative “poetics of culture” to capture the complex atmospherics of Paris in the 1930s. They highlight the new symbolic forces put in play by technologies of the illustrated press and the sound film—technologies that converged with efforts among writers (Gide, Malraux, Céline), artists (Renoir, Dalí), and other intellectuals (Mounier, de Rougemont, Leiris) to respond to the decade’s crises.

Their analysis takes them to expositions and music halls, to upscale architecture and fashion sites, to traditional neighborhoods, and to overseas territories, the latter portrayed in metropolitan exhibits and colonial cinema. Rather than a straight story of the Popular Front, they have produced something closer to the format of an illustrated newspaper whose multiple columns represent the breadth of urban life during this critical decade at the end of the Third French Republic.