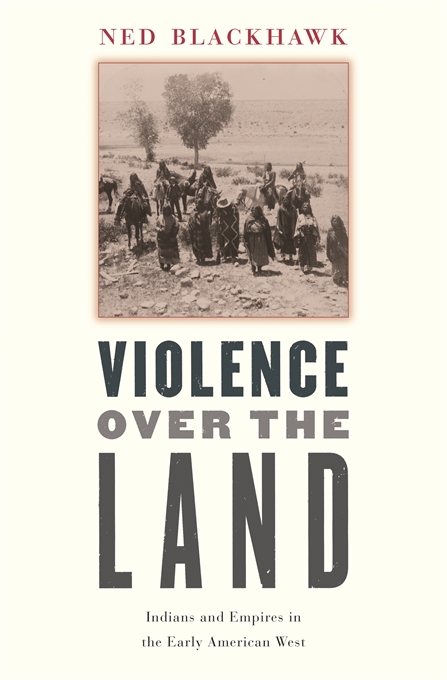 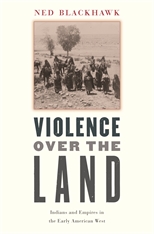 Violence over the Land

Indians and Empires in the Early American West

“Blackhawk’s achievement…is not just rephrasing what is already known, but actually filling a void in historical knowledge by restoring previously overlooked peoples to the record… Blackhawk claims that American history has ‘failed to reckon with the violence upon which the continent was built’… No other Western historian has exposed that violence as starkly as he has.”—David Wishart, The Times Literary Supplement

“Ned Blackhawk’s Violence over the Land provides much more than a few missing pages of what came to be the northern frontier of the Spanish colonial empire—or the early American West. More than that, it is a contribution to the living narrative of this continent…one that begins not with the arrival of three European ships in 1492, not with conquistadors or soldiers and missionaries—but rather far back to a time before recorded history on this continent… Violence over the Land is complex, layered history that covers what is nowadays referred to as the Great Basin… It is a region and a history that is normally ignored by U.S. historians.”—Roberto Rodriguez and Patrisia Gonzales, Column of the Americas

“This book fills large gaps—both geographical and historical—in the narratives of the intermountain West. Blackhawk demonstrates the prominent role of violence, albeit with occasional respires, in shaping native–settler relations. Furthermore, he shows how violence, and especially the attempts by native peoples to adjust to it, shaped their histories and social organizations. Violence over the Land is a significant addition to the history of the U.S. West. It sets a high standard on how to use colonizers’ accounts to present native views of history.”—Thomas D. Hall, Journal of American History

“This book takes an academic approach but reads well and reveals an interesting aspect of Southwestern history from a new perspective. It will probably be recognized as a ground-breaking advance in Native American history.”—Charles Bennett, New Mexico Magazine

“Ned Blackhawk’s Violence over the Land presents the empirical record from the Spanish West, the areas of New Mexico, Arizona, Colorado, and the Great Basin country of Utah and Nevada where the various Ute, Pauite, and Shoshone tribes lived. The age of modern empire brought first the Spanish empire and its clashes with the British and French empires, followed by the Spanish and American clashes that resulted in American supremacy across the continent. It is a perspective of an expanding American empire overtaking a weakened Spanish empire (after 1824, the Republic of Mexico), based on the view that American continental expansion was as much more about empire and empirical control of property, wealth, and resources, as any other civilizing drive… Blackhawk effectively weaves a story beginning with the Spanish, involving the rise of equestrian nations from captured and stolen horses, the effects of disease, the changes in tribal economies brought about by settlements and trade for products increasingly in demand as they became necessary for survival and accommodation to the newcomers, rifles and ammunition. Slavery played a large role in the economies of the area… The violence that is the subject of this book, of ‘Indians and Empires,’ carries itself forward today with American imperial ambitions around the globe. It is both the predominant military violence and its inter-woven cultural aspects, with the changing manner of accommodation by the groups that encounter and resist that violence. The American empire was born of violence, and as ably demonstrated by Violence over the Land, grew through violence to become the violent society and empire it remains today. Ned Blackhawk has done much justice to the history of his people and the manner in which the west developed, and the manner in which the American empire progressed.”—Jim Miles, Palestine Chronicle

“Blackhawk charges that too many U.S. historians fail to acknowledge ‘violence and American nationhood…progressed hand in hand,’ and need to recognize the long-term consequences of Native Americans’ experiences with European American imperialism. The author argues that histories that downplay the violence involved in the U.S. occupation of the West are woefully inadequate. This important book should be read by anyone interested in western or Native American history.”—M.C. Mangusso, Choice

“Blackhawk begins with the premise that too many histories written about the United States downplay the violence perpetrated by its citizens on native peoples. Through his study of the experiences of the various Ute, Paiute, and Shoshone groups residing in what is now Utah, Nevada, New Mexico, Colorado, and California (the Great Basin), Blackhawk vividly demonstrates the importance of illuminating the consequences of that violence, which continue to reverberate today. It should be noted that Blackhawk, a Western Shoshone himself, does not portray the natives as victims. Instead, he demonstrates that their perseverance and ability to adapt to changing conditions over the last two centuries allowed them to help shape the world around them. This exceptional monograph is one of the finest studies available on the native peoples of the Great Basin region.”—John Burch, Library Journal

“Blackhawk shows how the forces unleashed by conquest and colonialism reverberated across the Great Basin, a region badly neglected in most histories of Native America and the West. Far from the scene of direct Spanish–Indian encounters, complex relations of power and violence developed between different Native peoples as contests escalated over horses, trade, tribute, and slaves. In the nineteenth century, American explorers, miners, settlers, and government agents entered a world already in turmoil. Violence over the Land paints a searing picture of the ripple effects of colonialism on Native communities.”—Colin G. Calloway, author of One Vast Winter Count: The Native American West before Lewis and Clark

“Ranging widely across geography and time, Violence over the Land gives an often overlooked region and its peoples the same import routinely accorded the middle ground or the Atlantic rim. Ned Blackhawk’s compelling interpretation completely reorients our understanding of the early American West.”—Philip J. Deloria, author of Indians in Unexpected Places

“A powerful work that challenges a long list of myths and preconceptions, this ambitious book asks us to reimagine the conventional narrative of North American history. Blackhawk’s story of Great Basin peoples reveals both the violent history of the region and the habits of mind that, until now, have produced sanitized narratives of its past.”—Frederick E. Hoxie, University of Illinois

“At last, we Indigenous people of the Americas have a central part in history! In this major and much-needed work Ned Blackhawk features Indians in American history not in a peripheral role but in a pivotal way. While Native people were ‘caught in the maelstrom of colonialism,’ they were not merely victims but key participants in the hemispheric changes that began with Spanish imperialism in the fifteenth century. An outstanding contribution to the narrative history of the Americas.”—Simon J. Ortiz, author of From Sand Creek and Out There Somewhere

“A very impressive achievement. Blackhawk has managed through prodigious research to piece together a coherent history of an understudied region while at the same time developing original arguments with broad implications for North American history. Compelling, at times provocative, this book has the potential to shift the center of gravity within the field.”—Jeffrey Ostler, University of Oregon

“Violence over the Land reveals a tragic, yet telling account of colonialism, part of a tapestry woven from the threads of violence and indigenous pain running through the lives of the Ute, Paiute, and Shoshone communities.”—Estevan Rael-Gálvez, New Mexico State Historian

“Eloquently written, wide-ranging, and deeply researched, Violence over the Land highlights the pervasive pain that shaped and reshaped the area known as the Great Basin. Ned Blackhawk demonstrates that the peoples long derided as the most impoverished of ‘primitive bands’ were made that way by colonial history, not by culture or ecology. This is a major contribution to our understanding of the American experience.”—Daniel K. Richter, author of Facing East from Indian Country

“In this triumph of historical detective work, Ned Blackhawk recovers the lost story of the Great Basin’s Native peoples and brings them into the larger narrative of American history. Along with Utes, Navajos, Comanches, Spaniards, Englishmen, and Anglo Americans, violence itself is a major historical actor in this well-told story. Indeed, Blackhawk’s analysis of violence may force a reconsideration of its role in other regions of early America.”—David J. Weber, author of Bárbaros: Spaniards and Their Savages in the Age of Enlightenment

“Ethnohistorians have never given the West’s interior deserts, home to the Utes, Shoshones, Paiutes and others, the attention they have deserved. In this fine history Ned Blackhawk tells a fascinating and disturbing story, centuries deep, enriched by cultural and moral complexity, but ultimately revealing of the tragedy of native dispossession throughout the continent.”—Elliott West, author of Contested Plains

“Expansive, vivid, and beautifully creative, Violence over the Land is a tour de force. Blackhawk deftly weaves throughout the theme of violence and cultural change over three centuries in the scramble for a vast region of western North America. A missing piece of the puzzle has just been found.”—John Wunder, University of Nebraska