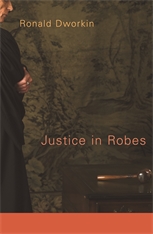 “Few philosophers or lawyers write with so easy and engaging a literary style as Dworkin, and the flow of his argument has striking persuasiveness… He has revolutionized the way many people think about law and related subjects… The power of his jurisprudence is enormous.”—Neil MacCormick, The Times Literary Supplement

“The underlying question is of the first importance—How do we reconcile the rule of law with judges’ deployment of their own values and their own theories of the good society?—and on that there is enough here that is new and important to make the book well worth reading for anyone interested in the law… Justice in Robes does more to open up new options in our thinking about the rule of law than a whole library full of books by opinionated pragmatists or by the careful conceptual purveyors of a purely analytic jurisprudence.”—Jeremy Waldron, The New York Review of Books

“For over three decades, Ronald Dworkin has been the most influential and illuminating analyst of the view that judges can or should merely ‘follow the law.’”—Cass Sunstein, The New Republic

“Dworkin’s Justice in Robes is bound to interest and challenge any student of law, philosophy of law, and philosophy in general. While the essays most directly address the question ‘What makes a proposition of law true or false?’ they contain a more general analysis of influential philosophical doctrines such as pragmatism, positivism, and pluralism. The lessons of Justice in Robes, therefore, go beyond the field of philosophy of law and reach to the areas of metaphysics, philosophy or language, ethics, and politics.”—Tatiana Patrone, Metapsychology Online

“Ronald Dworkin, one of the nation’s foremost legal philosophers, has solidified his legacy with his latest book. Justice in Robes presents a synthesis of Dworkin’s jurisprudential theory… Most intriguingly, Justice in Robes includes several chapters challenging the leading proponents of competing jurisprudential theories. Accessible, provocative, and enlivened by frequent clash, [the book] offers an ideal primer for students beginning their study of jurisprudence, and the book also rewards close scrutiny by scholars who are already familiar with Dworkin’s philosophy.”—Tom Liniger, Michigan Law Review

“Dworkin, a professor of law and philosophy at NYU Law School and University College, London, has for a generation been an influential voice in the rarefied debate that has raged in academia over how best to construct a logically consistent and philosophically useful description of what law is and what law should do. In addition, Dworkin has been a strong voice defending the jurisprudence that supports abortion rights, free speech and other liberal positions in more public debates. Consistent with both roles, these essays explicate Dworkin’s notion that law must have a moral component, and deconstruct and criticize the ideas of competing theorists. Against some of them, like the prolific Richard Posner, he takes the gloves off. For example, Dworkin describes one aspect of Posner’s jurisprudence as ‘remarkably implausible,’ strong words from a philosopher. Dworkin’s debate with others is more measured, but he is willing to step into the ring with each and defend his ideas. This is a serious, difficult book that succeeds in explaining what Dworkin believes, what the other theorists argue, and why it matters who is right.”—Publishers Weekly