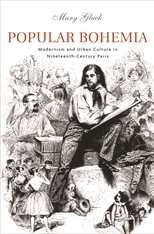 A radical reconceptualization of modernism, this book traces the appearance of the modern artist to the Paris of the 1830s and links the emergence of an enduring modernist aesthetic to the fleeting forms of popular culture. Contrary to conventional views of a private self retreating from history and modernity, Popular Bohemia shows us the modernist as a public persona parodying the stereotypes of commercial mass culture. Here we see how the modern artist—alternately assuming the roles of the melodramatic hero, the urban flâneur, the female hysteric, the tribal primitive—created his own version of an expressive, public modernity in opposition to an increasingly repressive and conformist bourgeois culture. And here we see how a specifically modern aesthetic culture in nineteenth-century Paris came about, not in opposition to commercial popular culture, but in close alliance with it.

Popular Bohemia revises dominant historical narratives about modernism from the perspective of a theoretically informed cultural history that spans the period between 1830 and 1914. In doing so, it reconnects the intellectual history of avant-garde art with the cultural history of bohemia and the social history of the urban experience to reveal the circumstances in which a truly modernist culture emerged.