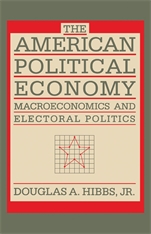 Here is the most comprehensive and authoritative work to date on relationships between the economy and politics in the years from Eisenhower through Reagan. Extending and deepening his earlier work, which had major impact in both political science and economics, Douglas Hibbs traces the patterns in and sources of postwar growth, unemployment, and inflation. He identifies which groups “win” and “lose” from inflations and recessions. He also shows how voters’ perceptions and reactions to economic events affect the electoral fortunes of political parties and presidents.

Hibbs’s analyses demonstrate that political officials in a democratic society ignore the economic interests and demands of their constituents at their peril, because episodes of prosperity and austerity frequently have critical influence on voters’ behavior at the polls. The consequences of Eisenhower’s last recession, of Ford’s unwillingness to stimulate the economy, of Carter’s stalled recovery were electorally fatal, whereas Johnson’s, Nixon’s, and Reagan’s successes in presiding over rising employment and real incomes helped win elections.

The book develops a major theory of macroeconomic policy action that explains why priority is given to growth, unemployment, inflation, and income distribution shifts with changes in partisan control of the White House. The analysis shows how such policy priorities conform to the underlying economic interests and preferences of the governing party’s core political supporters. Throughout the study Hibbs is careful to take account of domestic institutional arrangements and international economic events that constrain domestic policy effectiveness and influence domestic economic outcomes.

Hibbs’s interdisciplinary approach yields more rigorous and more persuasive characterizations of the American political economy than either purely economic, apolitical analyses or purely partisan, politicized accounts. His book provides a useful benchmark for the advocacy of new policies for the 1990s—a handy volume for politicians and their staffs, as well as for students and teachers of politics and economics.