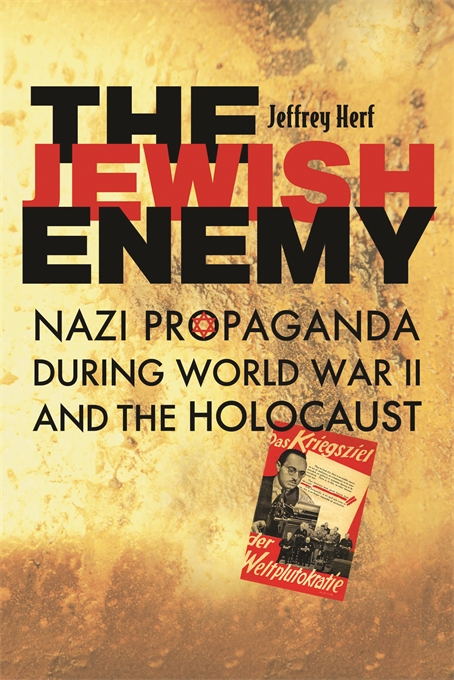 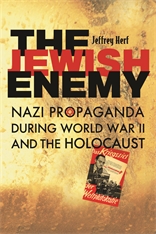 Nazi Propaganda during World War II and the Holocaust

“Many historians who have tackled Hitler and the Third Reich have found it impossible to take the Führer’s rhetoric or Nazi ideology seriously. A. J. P. Taylor was infamous for treating Hitler as an ordinary statesman in the German mould. A succession of historians, including Rainer Zitelmann, Detlev Peukert and Götz Aly, continues to insist that Nazism was a rational modernizing force. It is hard to see how this approach will withstand Jeffrey Herf’s patient, incisive and ultimately devasting analysis of the Nazi world-view in The Jewish Enemy.”—David Cesarani, Times Literary Supplement

“What may be the most important book on the Holocaust in a generation… In The Jewish Enemy: Nazi Propaganda during World War II and the Holocaust, [Herf] concedes that hatred and racism were important, but he argues that they don’t explain Germany’s unique efforts to destroy the Jews… The real answer isn’t hate, but fear. Poring through miles of speeches, private comments, journal entries, party memoranda and all 24,000 pages of Goebbel’s diaries, Herf concludes that the Nazis really believed that the Jews ran the world and wanted to destroy Germany. They believed that Jews controlled not only the Bolsheviks to the east but the capitalists to the west.”—Jonah Goldberg, Los Angeles Times

“Which of the major findings of this excellent study is more disturbing: that human beings are capable of inventing and believing the kind of vicious nonsense the Nazis believed about Jews, or that such profoundly irrational beliefs can become the basis of a meticulously devised and implemented program of industrial mass murder? It is indeed the case, to say the least, that ‘an examination of modern political culture draws attention to the causal significance of many irrational and illusory ideological perspectives’ …The Jewish Enemy is both a revealing, carefully documented historical study and a reminder of the timeless and astonishing human capacity for demented belief, bottomless hatred, and a correspondingly stunning readiness to act upon bizarre convictions and fantasies… This study is also highly informative about the methods and character of Nazi propaganda. The author makes use of sources not widely used before, such as the ubiquitous wall newspapers (also favored in communist states), posters, and archival materials (including directives to the press about the tasks and methods of propaganda), and the diaries of Goebbels, among others. Some striking visual images of ‘the Jewish enemy’ used in the press and posters are reproduced (remarkably similar to both Soviet anti-capitalist, anti-American propaganda and the images purveyed in Arab anti-Israeli propaganda).”—Paul Hollander, New Criterion

“With the market so saturated with books that have ‘Nazi’ in their titles, when a path-breaking new work does appear, one that explains the ‘why’—not just another documentation of the ‘how’—there is a chance it will slip under many readers’ radar. One can only hope that such a fate will not befall Jeffrey Herf’s incredibly important The Jewish Enemy, one of those rare works of Holocaust history that poses the most essential question: ‘Why did European, especially German, antisemitism, which had never led to an effort to murder all of Europe’s Jews before, do so between 1941 and 1945 in the midst of World War II? What changed to make anti-Semitism a rationale for mass murder rather than for a continuation of centuries old patterns of persecution?‘ …[Herf is] the legitimate intellectual heir to [George] Mosse.”—Noah Strote, Forward

“Undoubtedly, this is a much-needed study that convincingly demonstrates the centrality of radical anti-Semitic language in the Nazi leadership’s thinking and the regime’s wartime propaganda. Herf has succeeded in showing how in the minds of the regime’s leaders and propagandists the Second World War and the Nazi genocide of the Jews were directly and inherently connected.”—Thomas Pegelow Kaplan, Canadian Journal of History

“Herf is meticulous in his scholarship, and the book’s vivid detail can certainly hold up to historians’ scrutiny… This is a must-read.”—Dave Roy, Curled Up with a Good Book

“Through a chronological structure that moves seamlessly from an introductory section on pre-1939 Nazi propaganda themes and structures to the shifting narratives of the wartime period, Herf shows convincingly that the attacks on the regime’s wartime ‘enemies’ (Britain; after 1941 the Soviet Union and the United States) were underpinned by the same Überbegriff of an alleged ‘international Jewish conspiracy.’ …Herf’s book adds much-needed intellectual ammunition to the argument that propaganda should be taken very seriously.”—Aristotle A. Kallis, H-Net

“Herf has made excellent use of many overlooked sources… Most shockingly, he shows the remarkable extent to which the German people were informed by Hitler and his colleagues that the Third Reich was engaged in annihilating Europe’s Jews. The overall effect is one of a regime in thrall to its own paranoid fantasies, with devastating consequences that are all too familiar.”—Dan Stone, Journal of Genocide Research

“Jeffrey Herf, one of the most prolific and challenging historians of twentieth-century Germany, has written an important book, the first comprehensive work detailing the structure of the Third Reich’s effort to inculcate antisemitism in the German population. This was a propaganda effort, and much of Herf’s book focuses on Joseph Goebbels; but Herf also carefully delineates changes in the antisemitic content of Hitler’s speeches and gives a great deal of attention to Otto Dietrich, the Reich press chief. The result for readers is a nuanced sense of the volume and flow of antisemitic propaganda—and The Jewish Enemy leaves no doubt that antisemitism, indeed murderous antisemitism, was an ideology propagated up front and in public. For some readers, this may seem an obvious point, but a great deal of older research underscored how the Nazis placed antisemitism in the background, emphasizing instead the material gains that ordinary citizens could expect from Nazi rule. Herf shows that nothing could be further from the truth…it is Herf’s significant achievement to gather the antisemitic propaganda of the Third Reich and demonstrate its patterns. For the first time, we have a nuanced account of how state-produced antisemitism changed during the war and how this antisemitism connected to the Holocaust.”—Helmut Walser Smith, Journal of Modern History

“Jeffrey Herf’s latest book, The Jewish Enemy—dealing with Nazi propaganda during the Holocaust—sheds new light on what happened then in Europe and is a trenchant refutation of those who try to make us believe that antisemitic hate speech is merely a cynical tool employed by politicians… At the beginning of the twenty-first century, the demented discourse of radical antisemitism has resurfaced in different idioms and cultural contexts. It would be complacent to assume that variants on the narrative explored in Jeffrey Herf’s brilliant work will not play a part in the future as well… This is a book that should be read widely.”—Karl Pfeifer, Searchlight

“A commendable and compelling elucidation of the Nazi propaganda which accompanied the Holocaust, indispensable for both students of the Third Reich and general readers.”—Jay W. Baird, author of The Mythical World of Nazi Propaganda, 1939–1945

“Jeffrey Herf has written a brilliant book that reorients our understanding of the Holocaust. Arguing that racial antisemitism, however vicious, was an insufficient basis for genocide, Herf demonstrates that a major shift occurred in Nazi propaganda during the war: Jews were now presented as a political threat to the German nation, and as the instigators, through their puppets, America, England, and the Soviet Union, of a deadly world war against Germany.”—Susannah Heschel, author of Abraham Geiger and the Jewish Jesus

“In this impressive book, Jeffrey Herf shows that the omnipresent image of the ‘international Jew’ as the source of Germany’s victimhood was central to the propaganda and political imagination of the Nazi leadership, which made no secret of its intention to destroy European Jewry.”—Anson Rabinbach, Princeton University

“Here, practically for the first time, we can see how Germans before and during World War II were at all times in their daily lives confronted with a carefully designed view of the world in which a mythical Jewish enemy was portrayed as threatening Germans and hence had to be killed. No prior study has shown as clearly as this one how central this theme was to German wartime propaganda in all its forms.”—Gerhard L. Weinberg, University of North Carolina