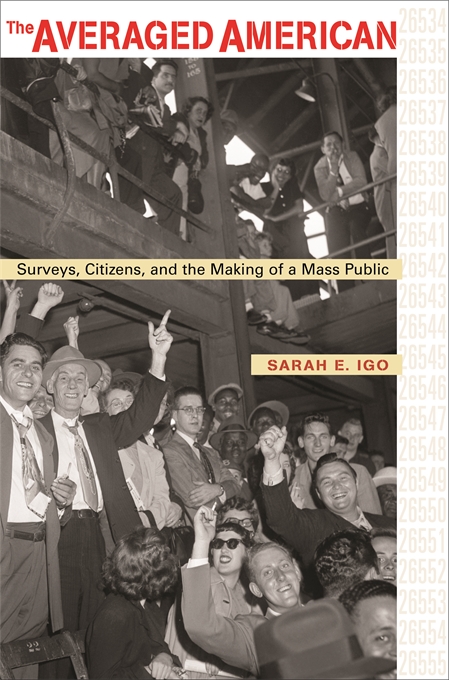 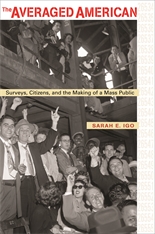 Surveys, Citizens, and the Making of a Mass Public

“A richly detailed account of the arrival of social science data in the middle of the 20th century and its lasting effects on the U.S.”—Financial Times

“With all of the data now available on consumers’ wants and needs, it’s hard to imagine that less than a century ago market research consisted of little more than knowing the number of widgets your business sold in Muncie. Then, in the years after World War I, commerce was revolutionized by the dawning of modern social science research and scientific polling techniques. A fascinating glimpse of the upheaval that forever altered the way Americans see themselves, sell products, and operate election campaigns may be found in The Averaged American: Surveys, Citizens, and the Making of a Mass Public.”—Richard S. Dunham, Business Week

“Sharp and surprisingly lively… Ms. Igo patiently documents how surveys came to exercise [its] grip on the American imagination… This is an excellent, thoroughly readable book.”—Brendan Boyle, New York Sun

“Americans have grown used to crisp statistics, but as Sarah Igo points out in her new book The Averaged American, it wasn’t always so easy to create a snapshot of the country’s collective psyche. Igo tells the story of how surveys and polls have contributed to a sometimes distorted, always controversial conception of the archetypical American.”—Kerry Howley, Reason

“Most people don’t bat an eye at the myriad statistics and studies cited by the media, the government, and the dinner guest. In The Averaged American, Sarah E. Igo documents the ‘movement of social data into everyday life,’ a fascinating shift rarely mentioned in discussions of the United States in the middle of the 20th century. Igo’s well-written, well-organized book focuses on three iconic moments: the Middletown studies of the ‘supposedly typical American community,’ the emergence of the Gallup and Roper opinion polls, and the controversial Kinsey reports on sexual behavior. Though some people disputed the methods or results of these studies, most accepted their newfound importance as the ‘inevitable product of a modern mass society.’ But, as Igo compellingly argues, the studies themselves were every bit as responsible for creating and maintaining that mass society.”—Danielle Maestretti, Utne Reader

“This is a significant contribution to the literature on the history of the social survey.”—Margo Anderson, Journal of American History

“Cultural historians of the modern era and social scientists of many stripes will find much to admire in this insightful volume. Igo reminds us how deeply steeped social scientific inquiries are in contemporary social conventions and attitudes. She also outlines the overlooked role social scientists have played in shaping today’s imagined communities, picking up where the census takers, map makers and newspaper publishers had left off during the century previous.”—John F. Reynolds, Journal of Social History

“Social scientists, pollsters, and market researchers now regularly apply the techniques of scientific sampling and measurement to their work. Indeed, survey research has become the dominant methodology used to produce social science scholarship, public and political polling, and consumer research. Sarah Igo puts into historical context the way in which these now-commonplace research techniques have transformed American society over the past century. Igo’s historical examination of survey research in America provides a compelling argument that the statistical data generated and disseminated by surveys have given America a new way to view itself—as a ‘mass public.’”—Ken Dautrich, Political Science Quarterly

“The Averaged American: Surveys, Citizens, and the Making of a Mass Public presents a fascinating history of the coevolution of scientific techniques and public consciousness through the use of polls, interviews, and surveys of the opinions and behavior of U.S. citizens… Historian Sarah Igo has delved deeply into various documentary sources, ranging from newspapers and popular magazines to specialized social scientific treatises, to provide the analytic backbone to this history. Finding fresh ways to deploy her copious source materials, the author loses no time before plunging immediately into her compelling narrative about the maelstrom of mass opinion, dissecting the who, what, when, where, how, and why of this broad sociocultural movement. Focused on the middle third of the 20th century, the story has an inherent dynamism that Igo enhances with remarkable literary verve.”—James H. Capshew, PsycCritiques

“The 20th century, marked by the ascendance of the social sciences in academia, brought to the US the movement to socially engineer society by surveying, measuring, statistically analyzing, polling, and categorizing Americans. Standardized IQ and behavior tests produced quantified measurements of what was average and what was normal. Polls replaced literary traditions in defining the ‘American mind’… ‘Normality’ increasingly lined up with quantified averages. ‘Mass public’ and ‘average American’ became synonymous with the search for a coherent US culture. The character of the ‘aggregated Americans’ emerges in Igo’s chapters on Robert and Helen Lynd’s Middletown (1929), George Gallup and Elmo Roper’s public polling, and Alfred Kinsey’s revelations of the behavior of statistically normal Americans. The movement magnified the issues involved in weighing the significance of statistical minorities. Igo’s well-written study is an excellent introduction to the problems involved in aggregating and disaggregating the US… [H]er book provocatively proposes the seeming inevitability that Americans need to understand that they will live in a world shaped and perceived through survey data.”—J. H. Smith, Choice

“[Igo] investigates how, in our poll-saturated culture, with its insatiable appetite for social facts, our ideas about who we are, what we want, and what we believe are all shaped by and perceived through survey data… Her reflections on the origins, trajectory, and subsequent social impacts of demographic research and its characterization of what constitutes the ‘median, average, typical, and normal’ are insightful. An important contribution to the early history of the information society and politics of knowledge.”—Theresa Kintz, Library Journal

“Few scholars of twentieth century America have been able to navigate the complexities associated with simultaneous change in multiple institutions—media, social science, the marketing industry, and community life. Igo does so with tremendous imagination and panache: The Averaged American demonstrates how numbers can transform both the texture of everyday life and the very course of a nation.”—Susan Herbst, Provost, The University at Albany, State University of New York

“In her strikingly bold and original The Averaged American, Sarah Igo captures the wonderfully rich and complicated relationships between surveys and those surveyed as she shows how this interaction helped create a mass public. We can see how those surveyed yearned for and understood their roles in the survey process—as well as the creation of expectations of what it meant to live as ‘typical’ or ‘average’ respondents/citizens in a mass society.”—Daniel Horowitz, Smith College

“A brilliant and probing inquiry into one of the subtlest but most significant developments of our time: the cultural construction of a mass society. The Averaged American illuminates the ideological uses of quantitative social research with extraordinary verve and acuity.”—Jackson Lears, editor of Raritan and author of Something for Nothing: Luck in America

“The Averaged American is an engaging, impressively researched history of the social scientific quest to conjure that ever-elusive ‘American’ public: what ‘we’ think, what ‘we’ believe, how ‘we’ will vote, how ‘we’ behave. Igo shows how, despite their shaky claims to objectivity, inclusiveness, or even accuracy, surveys gradually gained acceptance as a new, more ‘scientific’ way of knowing modern America, with consequences this important and never more relevant book challenges us to confront.”—Alice O’Connor, University of California, Santa Barbara

“The Averaged American turns the history of quantitative social research into a fascinating human story of interviewers probing and cajoling and of citizens who at times were desperate to give information about themselves and who sometimes welcomed, sometimes protested the new statistical characterizations of ‘normal’ American opinions and behavior.”—Theodore M. Porter, author of Karl Pearson: The Scientific Life in a Statistical Age