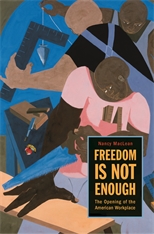 Freedom Is Not Enough

The Opening of the American Workplace

In the 1950s, the exclusion of women and of black and Latino men from higher-paying jobs was so universal as to seem normal to most Americans. Today, diversity in the workforce is a point of pride. How did such a transformation come about?

In this bold and groundbreaking work, Nancy MacLean shows how African-American and later Mexican-American civil rights activists and feminists concluded that freedom alone would not suffice: access to jobs at all levels is a requisite of full citizenship. Tracing the struggle to open the American workplace to all, MacLean chronicles the cultural and political advances that have irrevocably changed our nation over the past fifty years.

Freedom Is Not Enough reveals the fundamental role jobs play in the struggle for equality. We meet the grassroots activists—rank-and-file workers, community leaders, trade unionists, advocates, lawyers—and their allies in government who fight for fair treatment, as we also witness the conservative forces that assembled to resist their demands. Weaving a powerful and memorable narrative, MacLean demonstrates the life-altering impact of the Civil Rights Act and the movement for economic advancement that it fostered.

The struggle for jobs reached far beyond the workplace to transform American culture. MacLean enables us to understand why so many came to see good jobs for all as the measure of full citizenship in a vital democracy. Opening up the workplace, she shows, opened minds and hearts to the genuine inclusion of all Americans for the first time in our nation’s history.