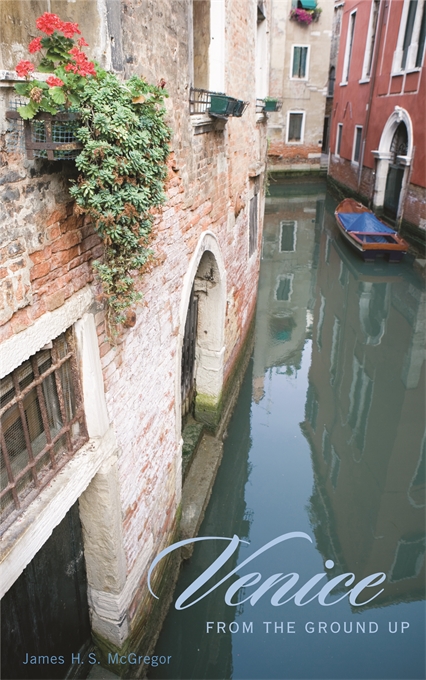 Venice from the Ground Up

“James H. S. McGregor marches us through the city, stopping off at his favourite sites, and offering along the way extended discussions of the main features of the medieval and subsequent periods of Venetian history. Moreover, he gives a much fuller account of the city’s political structure, its distinctive social patterns, and its cultural commitments than a guide normally allows… This may well be the best short account of the structure of [St. Mark’s Basilica] and the programme of its mosaics now in print. It is full of fascinating detail and acute observation… As a sourcebook of fascinating detail about Venice, laced with a splendid invective against Napoleon, this is a work that will profit even long-time visitors.”—Theodore K. Rabb, The Times Literary Supplement

“James McGregor’s historical portrait of Europe’s strangest and most beautiful city shows how Venice’s architecture and character came about in response to the peculiar environmental challenges of its location and its precarious political position. This book is organized topographically and chronologically, allowing the reader to explore the city’s monuments and canals through both space and time.”—London Review of Books

“More than a travel guide, this scholarly yet readable volume by James H.S. McGregor weaves the story of how art and architecture were used to create one of the world’s most enduring cities. For the armchair reader and those planning to visit Venice, this second-in-a-series guide (Rome was published in 2005) to the Queen of the Adriatic connects the city’s incredible history with daily life.”—Terry Richard, The Sunday Oregonian

“Whether an armchair traveler or a gondola aficionado, the romantic will enjoy James H.S. McGregor’s Venice from the Ground Up. This handsomely produced and always entertaining narrative history of the city of canals is full of useful information for tourists, lovely color photos and detailed maps.”—Jay Strafford and Sue Harris, The Richmond Times-Dispatch

“This well written portrait is superbly produced. Color photographs and maps of great quality are included.”—Ann Geracimos, The Washington Times

“[This is a] district-by-district guide to the ancient city’s profusion of art, architecture and artifacts integrated with its essential history and dominant cultural themes… A thinking person’s guidebook, well supported by illustrations, maps and rich perspectives.”—Kirkus Reviews

“McGregor has written a wonderful historical guide to the city of Venice… He explores the history, architectural landmarks, and artistic achievements of each of the geographical districts that form, arguably, the most beautiful city in the world… Armchair and real-life travelers will enjoy it.”—Robert J. Andrews, Library Journal

“This is an excellent book. The history of the city is recounted as if it were a story, which makes the whole work eminently readable. The history of Venice is as meandering as its canals, and to have achieved an overall straightforward path through it is no small feat. McGregor’s book is a perfect introduction to Venice. Italians themselves would read it with profit.”—Piero Boitani, Professor of Comparative Literature, Università di Roma La Sapienza