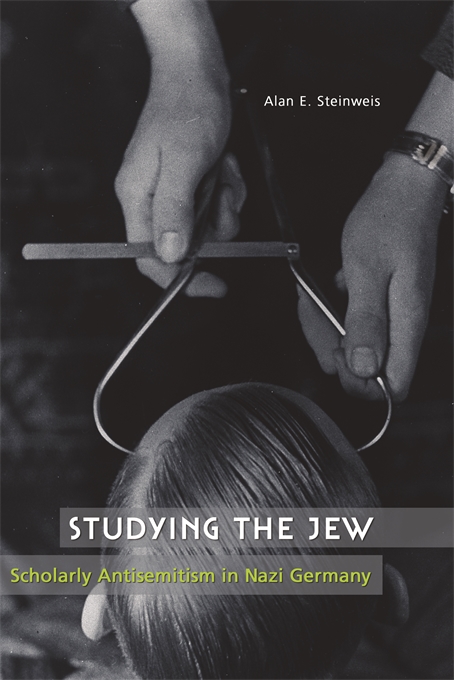 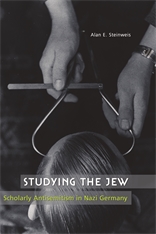 “[Steinweis offers] a compact study of Nazi scholarship that raises challenging questions to those of us engaged in scholarly research.”—Tim Cole, History

“Steinweis…uses a voice that reflects a dispassionate, academic tone, characterized by careful analysis of both the research and motivations of an array of scholars who studied and published on various aspects of ‘The Jewish Question,’ from the early 1930s through the very close of World War II… Despite the application of this ‘research’ that influenced to varying degrees a wide range of Nazi policies—up to and perhaps including The Final Solution—Steinweis’s review of specific scholars and their work reflects precisely the integrity lacking in those he writes of… The measured manner in which he addresses this important area of Holocaust history, including describing some of the post–World War II successes some of these scholars enjoyed in their professional careers, may, for some, lack a sense of the emotion-laden moral outrage we Jews so often want to see expressed… Yet, Studying the Jew helps us in no small way understand an aspect of what can otherwise be an unbearably painful part of our collective Jewish experience and consciousness.”—WLL, Jewish Book World

“This vastly intriguing volume is a paragon of scholarship.”—Sheldon Kirshner, Canadian Jewish News

“Steinweis proceeds by analysing the published works of several scholars representative of the major disciplines to which Judenforschung (research on Jews) was key: race science, theology, history, and sociology. The result is a rich and fascinating little book that convincingly demonstrates the way in which the humanities and social sciences ‘coordinated’ with the regime, much as the professions and industry did; and how these scholars made Nazi desiderata central to their own concerns, whether out of conviction or opportunism… For anglophone readers, the book is an excellent introduction to the subject of scholarly anti-Semitism.”—Dan Stone, Journal of Genocide Research

“Although the complicity of various professions with the Nazi regime has been well demonstrated, Alan Steinweis shifts the focus beyond the free professions, hard sciences, and technocrats to scholars in the humanities and ‘soft’ social sciences. He is concerned with how scholars in these disciplines both legitimized the regime’s insistence that there was a ‘Jewish problem’ to be solved and lent their expertise on Jewish matters to help the regime shape its destructive policies. Steinweis makes clear that this ‘tainted’ scholarship was not done by a tiny minority of ‘quacks&Rsquo and infiltrating radicals but was produced by respectable and mainstream scholars.”—Christopher R. Browning, University of North Carolina at Chapel Hill

“In this excellent work of enduring importance, Steinweis offers new insight, astute judgment and fresh research concerning the antisemitic scholars in Nazi Germany who lent intellectual respectability to the policies of racial persecution. Studying the Jew is an essential sequel to Max Weinreich’s classic of 1946, Hitler’s Professors. It is a valuable contribution to the extensive history of politicization of scholarship in modern dictatorships.”—Jeffrey Herf, author of The Jewish Enemy: Nazi Propaganda during World War II and the Holocaust

“In his meticulously researched study, Alan Steinweis reconstructs the academic networks that provided an aura of respectability for antisemitic persecution. Studying the Jew exposes the culpability of scholars who collaborated with Nazi race policy and nevertheless continued their careers after 1945 with barely a hitch. If one wants to understand the mentality of ‘desk murderers,’ this is an excellent place to start.”—Claudia Koonz, author of The Nazi Conscience

“By demonstrating how Nazi scholars and professors perverted their scholarship with a hatred of Jews, Alan Steinweis has written a work of great importance. ‘Jewish Studies’ was an antisemitic movement within the universities that included theologians, historians, sociologists, biologists, and others across the academic disciplines. This brilliant new book reveals how the academy became nazified, shaping a new interdisciplinary enterprise: pathologizing the Jew.”—Susannah Heschel, author of Abraham Geiger and the Jewish Jesus