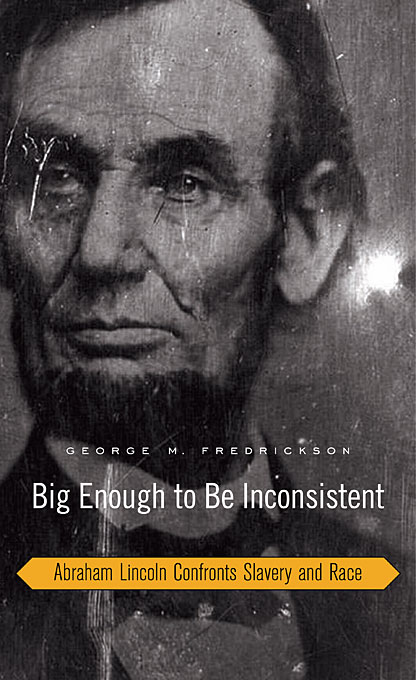 Big Enough to Be Inconsistent

“Cruel, merciful; peace-loving, a fighter; despising Negroes and letting them fight and vote; protecting slavery and freeing slaves.” Abraham Lincoln was, W. E. B. Du Bois declared, “big enough to be inconsistent.” Big enough, indeed, for every generation to have its own Lincoln—unifier or emancipator, egalitarian or racist. In an effort to reconcile these views, and to offer a more complex and nuanced account of a figure so central to American history, this book focuses on the most controversial aspect of Lincoln’s thought and politics—his attitudes and actions regarding slavery and race. Drawing attention to the limitations of Lincoln’s judgment and policies without denying his magnitude, the book provides the most comprehensive and even-handed account available of Lincoln’s contradictory treatment of black Americans in matters of slavery in the South and basic civil rights in the North.

George M. Fredrickson shows how Lincoln’s antislavery convictions, however genuine and strong, were held in check by an equally strong commitment to the rights of the states and the limitations of federal power. He explores how Lincoln’s beliefs about racial equality in civil rights, stirred and strengthened by the African American contribution to the northern war effort, were countered by his conservative constitutional philosophy, which left this matter to the states. The Lincoln who emerges from these pages is far more comprehensible and credible in his inconsistencies, and in the abiding beliefs and evolving principles from which they arose. Deeply principled but nonetheless flawed, all-too-human yet undeniably heroic, he is a Lincoln for all generations.