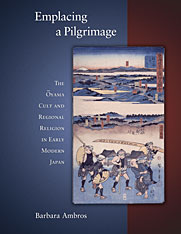 The Ōyama Cult and Regional Religion in Early Modern Japan

Towering over the Kanto Plain, the sacred mountain Ōyama (literally, “Big Mountain”) has loomed large over the religious landscape of early modern Japan.

By the Edo period (1600–1868), the revered peak had undergone a transformation from secluded spiritual retreat to popular pilgrimage destination. Its status as a regional landmark among its devotees was boosted by its proximity to the shogunal capital and the wide appeal of its amalgamation of Buddhism, Shinto, mountain asceticism, and folk beliefs. The influence of the Ōyama cult—the intersecting beliefs, practices, and infrastructure associated with the sacred site—was not lost on the ruling Tokugawa shogunate, which saw in the pilgrimage an opportunity to reinforce the communal ideals and social structures that the authorities espoused.

Barbara Ambros provides a detailed narrative history of the mountain and its place in contemporary society and popular religion by focusing on the development of the Ōyama cult and its religious, political, and socioeconomic contexts. Richly illustrated and carefully researched, this study emphasizes the importance of “site” or “region” in considering the multifaceted nature and complex history of religious practice in Tokugawa Japan.