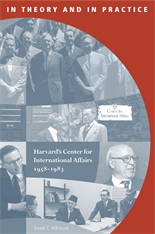 In Theory and in Practice

Harvard University inaugurated a new research center devoted to international relations in 1958. The Center for International Affairs (CFIA) was founded by State Department Director of Policy Planning Staff, Robert R. Bowie, at the invitation of McGeorge Bundy, Dean of the Faculty of Arts and Sciences. Joined by Henry A. Kissinger, Edward S. Mason, and Thomas C. Schelling, Bowie quickly established the CFIA as a hub for studying international affairs in the United States. CFIA affiliates produced seminal work on arms control theory, development and modernization theory, and transatlantic relations.

Digging deep into unpublished material in the Harvard, MIT, and Kennedy Library archives, this book is punctuated with personal interviews with influential CFIA affiliates. David Atkinson describes the relationship between foreign policy and scholarship during the Cold War and documents the maturation of a remarkable academic institution. Atkinson’s history of the Center’s first twenty-five years traces the institutional and intellectual development of a research center that, fifty years later, continues to facilitate innovative scholarship. He explores the connection between knowledge and politics, beginning with the Center’s confident first decade and concluding with the second decade, which found the CFIA embroiled in Vietnam-era student protests.