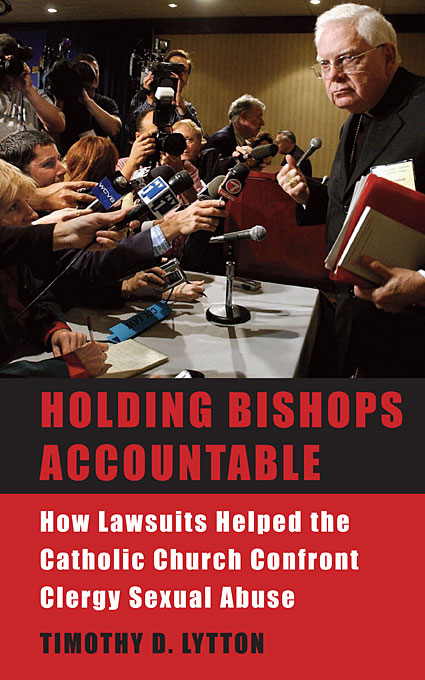 “This book will be of immense value to scholars of law and society yet also reads well to the layperson interested in the sexual abuse scandal involving Catholic clergy. Lytton does well in narrowing his research to give proper historical context to the sexual abuse scandal while simultaneously discussing the scandal as emblematic of institutional failure requiring institutional reform.”—R.S. Lorenz, Choice

“Timothy Lytton hits the nail on the head with this provocative book about the institutional failure of the Roman Catholic Church that led to the sexual abuse of tens of thousands of innocent children. Never before has the American tort system played such an influential role in educating the public and encouraging massive change in the way children are protected.”—Jeff Anderson, Trial Attorney, Anderson & Associates, P.A.

“Finally there’s a fair-minded and thorough look at the impact—positive and negative—of the legal arena in the Catholic Church’s ongoing sex abuse and cover up scandal. For those who want to better understand this crisis, and help prevent the next one, this book is essential.”—David Clohessy, National Director of the Survivors Network of those Abused by Priests (SNAP)

“Timothy Lytton makes a persuasive, even compelling, argument that tort litigation set the agenda for policymakers dealing with sexual abuse of minors in the American Catholic Church. His learned interdisciplinary approach blends institutional analysis with acute observation of how the victims’ counsel used the media to make the issue salient to the public and the discovery process to keep the issue interesting to the media. His book should be read, indeed studied carefully, by anyone who wants to understand the crisis as a whole.”—Michael R. Merz, Chair, National Review Board of the Catholic Bishops Conference

“Holding Bishops Accountable is a systematic and convincing examination of the conditions under which tort litigation can work to produce socially desirable consequences. Lytton demonstrates that litigation led to certain kinds of media coverage that framed the sexual abuse scandal in the Catholic Church in terms of ‘institutional failure,’ helped place child sexual abuse on public and institutional agendas, and resulted in the disclosure of crucial information that might not otherwise have been revealed.”—Austin Sarat, William Nelson Cromwell Professor of Jurisprudence and Political Science, Amherst College