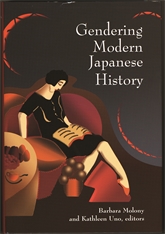 In the past quarter-century, gender has emerged as a lively area of inquiry for historians and other scholars, and gender analysis has suggested important revisions of the “master narratives” of national histories—the dominant, often celebratory tales of the successes of a nation and its leaders. Although modern Japanese history has not yet been restructured by a foregrounding of gender, historians of Japan have begun to embrace gender as an analytic category.

The sixteen chapters in this volume treat men as well as women, theories of sexuality as well as gender prescriptions, and same-sex as well as heterosexual relations in the period from 1868 to the present. All of them take the position that history is gendered; that is, historians invariably, perhaps unconsciously, construct a gendered notion of past events, people, and ideas. Together, these essays construct a history informed by the idea that gender matters because it was part of the experience of people and because it often has been a central feature in the construction of modern ideologies, discourses, and institutions. Separately, each chapter examines how Japanese have (en)gendered their ideas, institutions, and society.